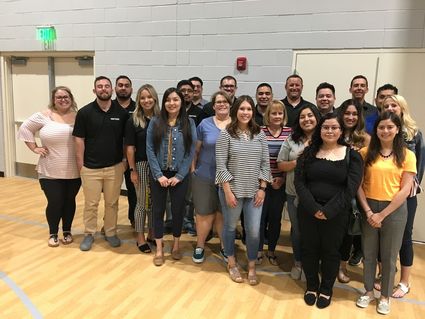 Staff inside the gymnasium.

Superintendent Kelly Richers welcomed everyone to the new gym on the Palm Avenue Middle School campus.

“This year, all the school sites had some sort of construction happening, which made working at the school sometimes very difficult,” Richers said. “Some schools were more inconvenienced than others.”

Richers refreshed everyone’s memory about how the new school and the reconfiguring of Palm Avenue from an elementary school to the district’s second middle school occurred.

He mentioned that Karl Clemens lost its field for half a year and added that Forrest Elementary will have their field in the middle of September.

“Our board of trustees realized several years ago that the district needed more space for the increasing number of students entering,” Richers said. “Our middle school, Thomas Jefferson, was well over 600 students, and we knew we needed two middle schools. Palm Avenue was the most realistic one to renovate.”

According to Richers, the cost to build the new elementary school was $26 million and the cost to renovate Palm Avenue was $34 million, well within the allotted monies available after a school bond was passed.

He also added that during the construction, Teresa Burke added four new classrooms and a bathroom.

When everyone settled down, Richers acknowledged each school undergoing construction and asked each school’s staff to stand for recognition. He then introduced each principal individually and they, in turn, introduced their new teachers to everyone.

Some teachers relocated to the new elementary school, while others changed grades, but every group that had to go through some sort of construction was acknowledged. Richers also had the 2018 Palm Avenue staff stand for recognition and praised them for putting up with so much construction while continuing to provide instruction to students during the school year.

In addition, Richers reaffirmed that the Maintenance Operations and Transportation building will be completed this winter. He joked that the hard part would be coming when they had to move everything from their old site to the new one.

Attendees were overheard commenting on how beautiful the gymnasium is and, that all 480 employees were able to be seated at round tables on the floor.

Joining the district staffs were: 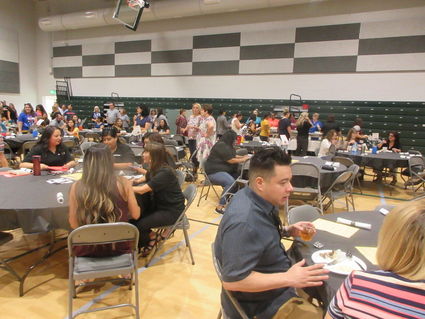