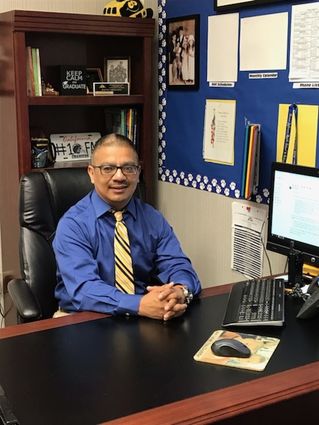 TJ Principal Danny Arellano is ready for the first day of school.

"Because of so many sixth graders attending the middle school, we are happy to invite parents to visit the campus on Friday, Aug. 9 from noon to 3 p.m. to become familiar with the new middle school setup," Arellano said.

Arellano was born in San Diego, but his family moved to Wasco when he was two years old due to the agricultural opportunities. He is proud of the fact that he attended all Wasco schools and graduated from Wasco High.

"I have so many fond memories of earlier days in Wasco when there were no portables, no fences surrounding the schools, and no one had to check in at the office before heading to their child's classroom," he said.

He realizes how much the times have changed. One thing he hopes to continue is getting to know each student's name.

"Back in the day, everyone knew who everyone was," Arellano said.

Arellano was raised by a single mother. "Educator Ruby Payne wrote a book entitled 'Emotional Poverty,' which I read. The book states that I had an 8% chance of finishing school."

In high school, Arellano participated in wrestling. "When I was a freshman, I didn't weigh the magical number of 83 pounds, so I didn't wrestle most of the year. However, I finally reached the required weight and wrestled during high school, weighing in at 98 pounds. They don't even have that weight class any longer."

Arellano attended Bakersfield College and ended up on academic probation his first year. However, after that, he focused on his classes and grades and transferred to California State University, Bakersfield, where he obtained his bachelor's degree, taking an additional year to get his credential.

Arellano believes it's important to instill values in everybody. "Every interaction we have with a student should be a position interaction."

Continuing his education, Arellano returned to CSUB and obtained his master's degree in 1996.

"I'm a firm believer when a boss gives you a suggestion, you follow that suggestion," Arellano said.

Because he has had experience at the elementary and middle school, he feels comfortable with the middle school age group. "I love the kids because of their adversity," he said. "I enjoy the changes they are going through and the opportunity to be able to help them through those changes."