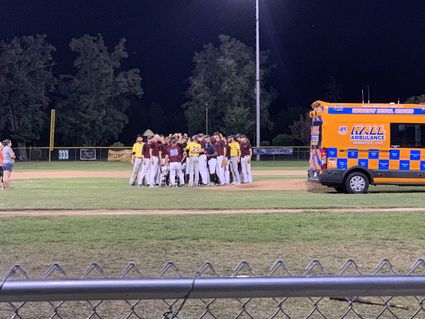 The players from both teams huddle while blocking the view of injured pitcher Conyal Cody. (Photo by Sunshine Ceja)

When athletes are on the field, one of the worst sounds spectators can hear is the snap of a bone.

During the fifth inning, that's what everyone at the baseball park heard on Thursday evening, July 25, as the Wasco Reserves baseball team played the Monterey Amberjacks. The Amberjacks were ahead until the fourth inning when the Reserves had bases loaded and three runners walked, bringing the score to 7-5.

At first, many thought he had dislocated his shoulder; however, after the game, it was discovered that he had broken his humorous bone at the elbow. (The humorous bone goes from the shoulder to the wrist.).

"Jackson and Cody have been friends off the field for a while," Reserve Coach Bill Moore said. "It's not unusual, with the small number of players in the Pecos League, that they know each other from either playing together on another team or attending the same school. Moore explained that with only six teams in the league, players from opposing teams often become friends because they play each other so many times during a season.

Once he heard the snap and saw Cody drop, attendee Danny Rueda yelled out for someone to call 9-1-1, which was immediately done. This was about 9 p.m.

It wasn't until 25 minutes later that spectators spotted Hall Ambulance outside the gate at the west end of the field, opposite from where the game was being played. The two Hall responders hauled the stretcher onto the field and slowly made their way to the pitcher's mound.

Spectators began complaining loudly that they were walking too slowly.

Several minutes later, another two responders from the ambulance walked onto the field, each carrying big black bags.

Coach Moore stated that he thought the bags had medication in them to treat Cody.

Spectators then began saying loudly that it took too long for a response to the original call.

"Jackson, #57, was visibly upset after Cody hurt his arm," Moore said. "He was so upset he headed back to his home in Escondido immediately after the game was called."

Hall Ambulance's director of media services, Mark Corum, did not answer questions about the response.

"Unfortunately, due to HIPAA and patient privacy, I am prohibited by federal law from discussing a specific patient call," Corum noted in an email, recommending that county EMS officials might be able to say more.

Once the ambulance entered the field, all players got down on bended knee and surrounded the stretcher to block it from the view of the spectators.

Later that evening, Cody's mother drove from Monterey to Wasco when she found out he had been hurt and arrived at the hospital around 1 a.m., Coach Moore said. "I don't know his condition as of right now, but I do know he was supposed to have surgery on Friday or Saturday."

Hall Ambulance had expanded its fleet in Kern County by opening a new facility in Lost Hills in February to serve the Lost Hills and Wasco areas. 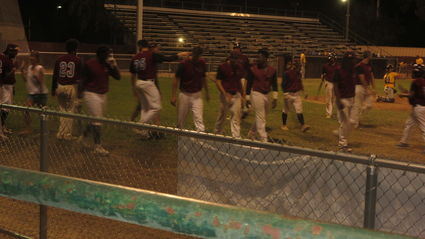 Reserve players notice something unusual has happened on the field.

According to Hall Ambulance, the launching of the newest facility in Lost Hills would enable speedier turnaround time.

In a phone call the day after Thursday night's game, Moore added that it was a terrible way to win a game once the game was called. The Reserves were ahead, 9-5.

"According to Cody's doctor, he might not be able to begin physical therapy until six or seven months from now," Moore said.

The team won another game on Sunday, 5-3, against the Bakersfield Train Robbers.

This week is the last week the Reserves will play in Wasco. Thursday, Aug. 1, they play the Monterey Amberjacks; Friday, they play the California City Whiptails and Saturday – their last game -- they play the Tucson Saguaros.

All games are scheduled for 7 p.m. starts at the Ballpark.