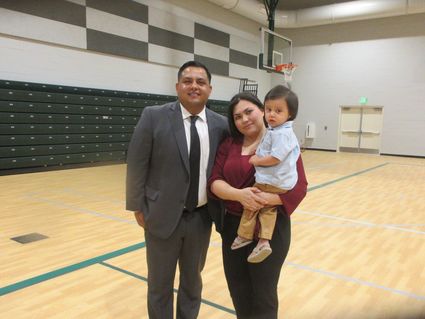 A local educator with roots in the community has been selected to head the new Palm Avenue Middle School.

Oscar Luna was born and raised in Wasco and attended all Wasco schools. He is a 2002 graduate of Wasco High School. After graduation, he attended California State University, Bakersfield, and earned a double major in criminal justice and sociology.

Luna's career has taken him in several different directions. First, with the Kern County Superintendent of Schools, he had a unique position as a teacher and program specialist, working in the migrant education area. Following KCSOS, Luna worked as a counselor at Wasco Independence High, vice principal at Delano High, and now returns to Wasco as principal of Palm Avenue.

"I feel fortunate to be able to return to Wasco and work for the Wasco Union Elementary School District as the first principal in the second middle school in town -- Palm Avenue Middle School," Luna said. "We want to have a welcoming and safe school culture."

Luna is excited to be the leader of a school site and move it in the right direction. "I want to make sure that our students' academic and emotional needs are being met," he said.

In his personal life, Luna loves to spend time with his family, which includes his wife and son.

Luna is looking forward to opening the doors to show off the changes that have turned Palm Avenue from an elementary to a middle school.

"I love my community," Luna said. "I look forward to getting more involved."