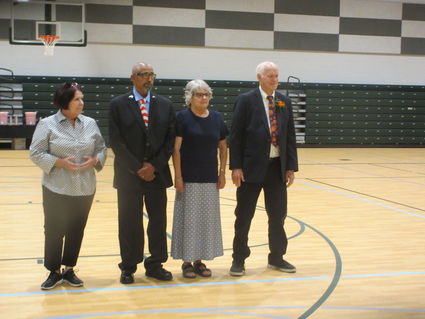 On Tuesday, July 30, the ceremonies began at 9 a.m. at James A. Forrest Elementary School and continued on to Palm Avenue Middle School at 10 a.m. where the new Richard Reding gymnasium was also celebrated.

Superintendent Kelly Richers provided background information to the guests as he described what it took to build a new elementary school and update, expand and renovate the physical education facilities at Palm Avenue.

"There was a six-year plan the District was considering," Richers said.

Richers continued by stating that during the second year of the plan, the district looked at feasible sites where it could build an elementary school; however, "the school site was actually owned by two separate parties" Richers said. "The eastside owner was eager to sell, but the west side owner thought there might be more money in having a developer build houses. "

He added that eventually, both properties were sold to the district. "Consequently, the district acquired the 27 acres in total, 15.5 of which are used for this site, making it one of the largest in the district," Richers said. "One of the buildings on this site is within a few feet of the flight path zone for Wasco 'International' Airport," Richers joked.

After obtaining the site for the school, the district waited to see if the city would pass the bond issues needed because a local bond was necessary to even begin.

During the ceremony Richers acknowledged and thanked all those who were involved from the beginning to the very end.

"All the physical work you see here is only 13 months of the six years it took to make the school come to completion," Superintendent Kelly Richers said as he welcome guests to the opening of James A. Forrest Elementary School on Tuesday.

He then gave a brief biography of James A. Forrest and what the dedication meant.

Richers remembered Forrest a not only a colleague, but as a friend.

"I am happy that James Forrest lived long enough to know the school was going to be named for him, and only wish that he was here to see the almost-completed vision that we both had," Richers said. "This is just one of the projects we planned."

Richers offered insight into Reding's life, noting that he began his 35-year teaching career in the district. "He taught over 7,000 students," Richers said. "He has not only taught them physical education, health and typing, he taught them respect and self-discipline. There are many of his former students who recall 'jumping the pole' or 'jumping the wall' when they attempted to test the waters."

Also, Richers added that one of Reding's pet peeves is when someone wears a hat or a cap indoors, or especially at the table. 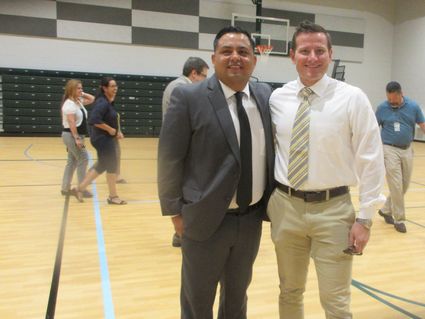 In addition, Richers included a story that when Reding decided to run for the school board, volunteers made up signs, "Vote Richard Reding for School Board." When former students got wind of this, they quickly said, "No! Most people don't know his first name is Richard. Reding took their advice and changed his signs to read "Vote for Mr. Reding." And he was elected by a large majority.

Richards is well-known in the because he lives here, does repair and construction work for numerous people, and he and his wife Sarah are involved activities from church-related to donations and volunteer work throughout the city.

"Few people are as recognizable or respected as our own Mr. Richard K. Reding," Richers said. "And it's a pleasure to dedicate this gymnasium to him and put the pressure on him to shoot the first foul shot at the Richard K. Reding gymnasium."

Richers presented Reding with framed "#1" jersey, and he then proceeded to the basket and made his foul shot.