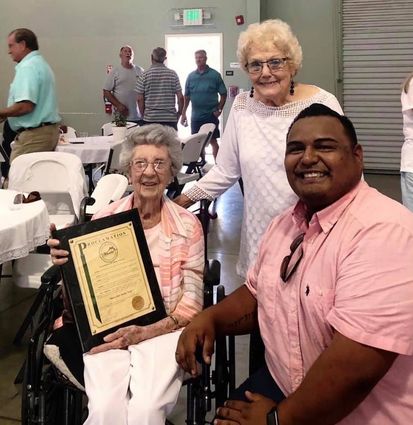 Mary Ellen Rexius, a long time resident of Wasco now residing in Shafter, was born on July 21, 1919, in Alton, Mo.

A full house in the recreation room at the church visited with Rexius and reminisced about the past years, while celebrating the present, too. Rexius was born to parents Charles and Pearl Boyd and was an only child, but her parents welcomed her friends as their own family. Rexius was educated in Missouri schools and taught third grade for seven years. In 1947, she answered an ad in a Memphis newspaper and came to Wasco on the train to teach third grade at Wasco Elementary School and taught there until 1954.

Rexius said that she remembered that day in August when she arrived in Wasco "because it was the hottest day of the month." 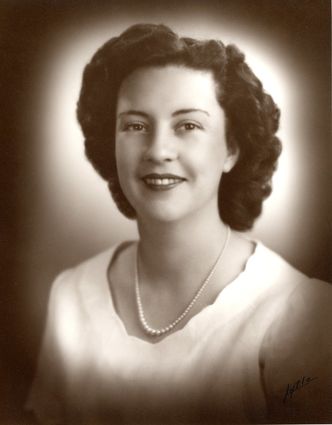 In December 1950, she went to a dinner dance on a blind date where she met Ray Rexius. They were married on June 1, 1950. Five years later, they welcomed son Michael into their family. She was able to help Ray at Rexius Studio and participate in Mike's activities as he grew up. Mary Ellen accepted a job in the English Department at Wasco High School after Mike left for college in 1973 and enjoyed working with the staff and students there for 13 years. The Rexius family grew a little more with the birth of grandson Jacob in 1982. His visits and activities kept their retirement years lively. Sadly, she lost Ray in 1999 and Michael in 2015. Rexius is currently residing at Carrington of Shafter. Mary Ellen said that she really enjoys her new home at Carrington. "They are taking very good care of me. I really love it there."

Mary Ellen has been very active in her community. She enjoys membership in the Wasco Rose Society, Historical Society and Grace Community Church. She is also a member of the Wasco Woman's Club and PEO Sisterhood for over 50 years. Mary Ellen served as grand marshal of the Wasco Rose Festival in 2005 and was honored again on Saturday when Wasco Mayor Alex Garcia presented her with a proclamation from the city designating this week as Mary Ellen Rexius Week.