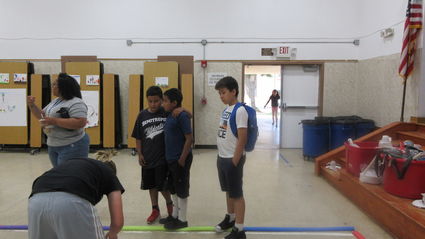 Students prepare for the bot competition.

The West Kern Consortium gave the district a five-year grant, providing funding for 140 students participating this year. Students from Wasco who attend Semitropic or Maple were able to attend the session.

Parents watched students battle their bots on the last day of class and viewed a slide show of the many activities offered at the site during the session.

The session was led by Boys and Girls Club of Kern County Site Coordinator Veronica Delson. She actively participated in the bot competitions, challenging students to beat her during many battles.

Delson, a math and science instructor at Sierra Middle School in Bakersfield, enjoyed her time with the kids.

"I love having the kids explore new things," Delson said. "The students designed and created their robots themselves. A paper plate, paper cup and some glue, tape and colored pens made great, colorful robots."

Delson explained that one of the exciting activities the students learned was how to code computers. "They all know how to use a cell phone, iPad and tablet, so this was easy for them to do." 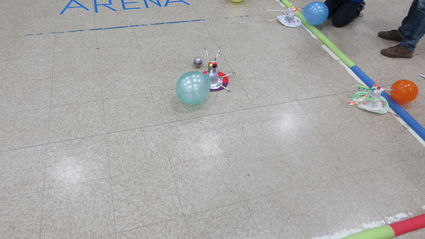 A bot in motion.

Each robot has a Sphero Bolt (round ball with a small computer inside). The ball is similar to the Sphero Ball that was in the last "Star Wars" movie, "BB8." The ball had a role in "The Last Jedi" and will be in the next Star Wars movie.

Eighth-grade student Manuel Ponce said that making and playing with the robots was fun.

"The best part about this program is learning how to program a robot," sixth-grade Maple School student Nathan Dickson said. "When we grow up, we can use what we learn here when we work."

The grant also covers an after-school program at Semitropic through the 2019-20 school year.

The Lost Hills School District provided breakfast and lunch, including kid-type meals such as nachos and corn dogs.

Students were bused to the program by the Lost Hills School District.