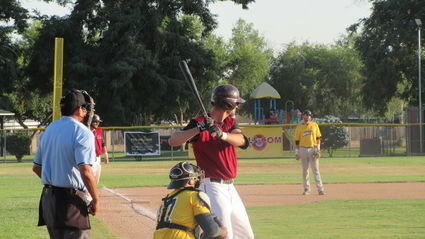 The runs, the hot dogs and the attendance were all high-scoring at last Thursday's Wasco Tribune Night with the Reserves.

"We had the largest number to date attending a Pecos League game," Coach Bill Moore said. "A record was set."

The stands filled up quickly, and the dogs went fast. The line to the concession stand snaked around the side property fence. "It took over 45 minutes to get to the front of the snack bar," attendee Jill Drescher said.

For regular baseball games, the concession stand purchases enough for 300 hot dogs; however, no one was disappointed after the Tribune made sure the stock of dogs and soda was replenished. But it did come down to the last bun, just as the game came down to the last inning.

And the game against the Monterey Amberjacks went to the end, too, with the Reserves on the wrong end of a 9-8 final.

It was family night at the ballpark, as parents accompanied their youngsters to the game. With the stands filled with people and music, the mood was energizing. Wasco Bengals Coach Omar Rincon treated his team to the game.

It wasn't only Wasco fans in the stands. A group of men who follow the minor league games drove from Porterville to enjoy an evening out. And there was a smattering of Shafter jerseys in the crowd. 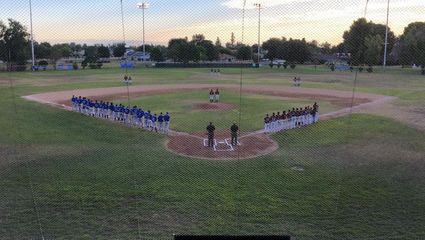 Spirits were up and baseball fever was evident as SAL's Haley Adams was handing out raffle tickets to win a wooden plant holder, with proceeds going to help out with expenses of the Reserve players.

On Saturday morning, Reserve players put on a coaching clinic for those wanting to improve their skills. Several kids were in the batting cage, outfield and infield taking advantage of the extra help.

So far, the season has had highs and lows for the team. Last week was no exception. On Thursday they lost, but on Friday they beat the California City Whiptails, 11-9.