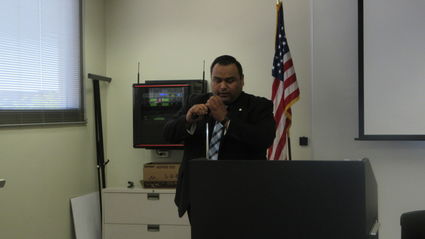 Funding to local cities is dependent on every individual filling out a census form, local mayors and other officials said at a media event on Friday. And no matter what the answers on the form are, no one should be fearful of what the information will be used for.

The importance of completing the 2020 census and the high stakes for Kern County were discussed at the media blitz held Friday in Bakersfield.

The message to all of the smaller communities within Kern County and throughout America was that everyone needs to be vigilant about filling out the 2020 census forms so that everyone can be counted.

"When people don't fill out the census, funding won't be available for their communities," Sandy Close, of Ethnic Media Services, said. "The citizenship issue is at the forefront of today's news."

Fear was the operative word used when discussing filling out the census packet. The only reason the Census Bureau collects information is to produce statistics, census officials said. And they assured the public that personal information may not be used against anyone filling out their census form.

Any violation of privacy laws dealing with census information can include five years imprisonment or a fine up to $250,000.

California Complete Count – the coalition encouraging full participation -- has three goals: 1) to monitor federal and state information; 2) to dispel misinformation; and 3) to continue to highlight Title 13, the security of public information by enforcing privacy laws and so that individual data is never published and it is against the law to disclose or publish private information that identifies an individual, including names, addresses, GPS coordinates, Social Security numbers and telephone numbers.

The four local mayors who addressed the attendees included Alex Garcia from Wasco, Joseph Aguirre of Delano, Jose Gurrola of Arvin and Manuel Cantu of McFarland.

Professor Ed Flores of the University of California at Merced asked the audience the question, "Why do demographics make a difference?"

They make a difference because without an accurate census count, government funding of programs for different communities would not be accurate. "Our funding is based on our census count," Flores said.

"In 1990, rural California had the highest risk (6.4%) of being undercounted, and Kern County was higher than that." Flores said.

Flores said that if we don't have the numbers, we won't have the programs for anyone. "Zero to five-year-olds in households has not been regularly counted," he said.

Flores also mentioned that 2020 will provide information for economic development.

The mayors emphasize the importance of full participation.

"Make us known," Wasco Mayor Alex Garcia said. "We must get our fair share of funding."

"We don't get resources unless we are counted," Delano Mayor Joseph Aguirre said.

Aguirre used the Delano Regional Medical Center as an example, explaining how funding affects its operations. "If we don't get the numbers of all our residents, we lose funding for programs that are needed."

Arvin Mayor Jose Gurrola agreed with peers, saying that filling out the forms is critical to getting a fair share of funding.

Additionally, Former Arvin city council member Raji Brar and part of the South Asian community told the attendees that she is Punjabi and until 2020, they have not been counted in the census as a group. "This is the first year we will be counted," she said.

"About 25,000 American Indians live in Kern County," Sandra Hernandez from the Tejon Indian Tribe said. "The impact of the count will mean healthcare benefits, mental health benefits and dental services for everyone." 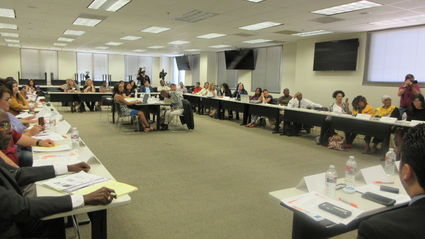 A view of the room, which held the session.