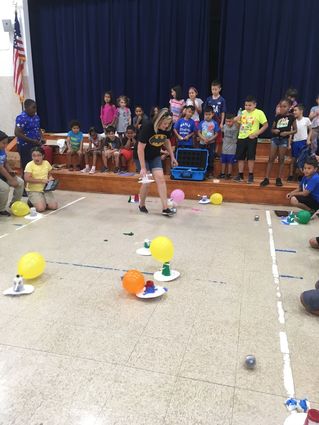 The bots are being set up for the competition. Each student tries to pop the balloon on competitors' bots.

Because of a new grant provided by the West Kern Consortium, Wasco students who attend Semitropic and Maple schools are able to participate in a special four-week summer program.

The Boys and Girls Club's program takes place at 25300 Highway 46, on the campus of Semitropic School. The school has set aside a large room for the participants.

"I am a teacher at Sierra Middle School in Bakersfield," Delson said. "I teach math and science to seventh-graders. I've also worked with foster youth before."

Delson has a vibrant personality that engages the students around her. She has their full attention, except when they are getting ready to compete. Then the room erupts into laughter with lots of loud chatter as the kids prepare their projects for competition.

"The students designed and created their robots themselves," Delson said. "A paper plate, paper cup and some glue, tape and colored pens make great, colorful robots."

Delson explained that one of the exciting activities the students learned was how to code computers. "They all know how to use a cell phone, iPad and tablet, so this is easy for them to do."

Delson also pointed out that we adults tend to live in a box yet kids are able to think outside that box with their creative imaginations.

Each robot has a Sphero Bolt – a round ball that is a small computer inside the ball. The ball is similar to the Sphero Ball that was in the last "Star Wars" movie and was called BB8. The ball was a regular cast member in "The Last Jedi" and will be in the next Star Wars movie.

Delson challenged the students to a battling bots dual but was outmatched by Semitropic eighth-grader Abel Alcala.

"I love the program," Abel said.

Another eighth-grade student, Manuel Ponce, said that making and playing with the robots was very fun. 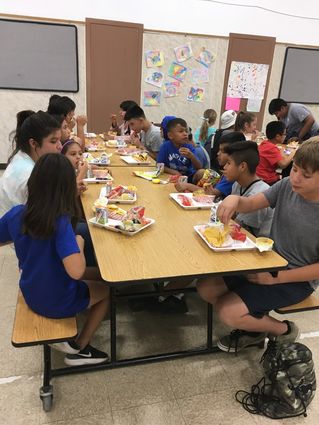 It's lunch time and everyone is ready for the break.

"The best part about this program is learning how to program a robot," sixth-grade Maple School student Nathan Dickson said. "When we grow up, we can use what we learn here when we work."

"I have mixed feelings about the program," incoming seventh-grade Semitropic student Jovanni Madrigal said. "I'd rather be outside than inside."

The Lost Hills School District provides breakfast and lunch for everyone with alternative meals available for lactose-intolerant students. These are fun, kid-type meals such as Thursday's menu was nachos with an alternative of corn dogs available.

All students are bused to the club by the Lost Hills School District.

There are currently 140 students enrolled in the short summer school program.