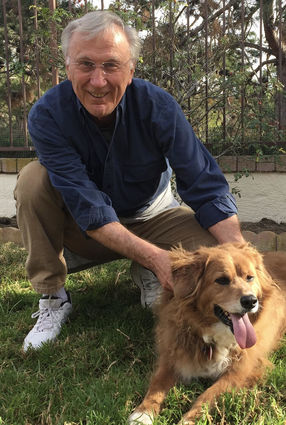 He was born in Los Angeles. Doug went to Wasco Union High School and played football and competed as a swimmer. He attended Bakersfield College. After working as a lifeguard, at Greybar Electric, and at his parents' farm in the Central Valley, Doug moved to Los Ángeles to become a grip in the motion picture industry.

During his 36 years as a grip, Doug worked on countless films and tv shows, including ""The Love Boat," "Starsky and Hutch," "Charlie's Angels," "Battle for the Planet of the Apes," "Mad About You," "Seinfeld," "Young Frankenstein" and "Blazing Saddles."

In his retirement, Doug enjoyed playing golf and intently following sports. He was also a musician and songwriter and dedicated evenings to writing songs and playing one of his eight guitars.

Doug loved dogs and cherished his daughter Julie's dogs like they were his own.

He was preceded in death by his sister, Diane, and his parents, William William Bolder and Mary John Bolder. He was survived by his daughter, Julie. Doug will be remembered as a caretaker of his family and animals. He was a loving father to his daughter, Julie.

Graveside services were held on Friday, June 14 at Pierce Brothers Valley Oaks in Westlake Village. The family and close friends will gathered after the funeral to celebrate Doug's life with food and music.

Memorials may be offered in Doug's name to American Society for the Prevention of Cruelty to Animals.