Unique park within a park opens 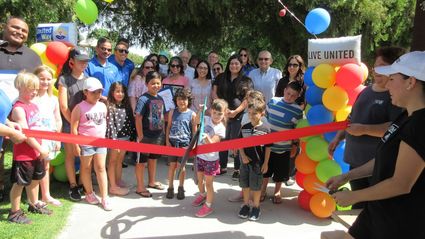 Mayor Alex Garcia was part of the official ribbon-cutting ceremony.

The city of Wasco is working hard to provide a variety of activities for its residents during the summer months.

Not many people knew beforehand what a Born Learning Trail was. In fact, resident Terani Hasha said she didn't know what was happening at the park as she drove by so she stopped to see what was happening and got caught up in the ribbon cutting with her children.

"This isn't a park I usually come to," said Hasha. "I've never heard of a Learning Trail."

Hasha arrived at the park with her 15-month-old son, Andrew, and 5-year-old daughter, Audrey Hathcock.

The park was divided into several different activity stations that allowed younger children to engage in simple physical activities. These included hopping, skipping sideways, listening to music, and describing how a flower feels and what it smells like using their own words.

Born Learning was introduced in 2005 by the United Way. The new trail is the eighth one installed in Kern County, said Jorge Haiek, a computer technology employee at United Way who volunteered to help create the trail.

"We brought volunteers here to the park, assembled the posts with the signs (one side in Spanish and one side in English), and placed them in position next to the appropriate station." Haiek said. "Working together with everyone was a rewarding experience as we all enjoyed getting to know people from other organizations by sharing ideas, meals and activities with each other."

"The sidewalks were colorfully painted with artwork created by kids and volunteers," Haiek added.

"This is just the beginning in the renovation of Cormack Park," said Wasco Recreation and Parks district manager Vickie Hight. "The Wasco recreation board of directors and staff are working on a grant with the city's grant writer, Sally Livingston, to seek monies to change the seven-acre park into a drought-tolerant landscape with walking paths, solar lighting, fitness equipment, dog park, t-ball fields, basketball courts, soccer fields, hopscotch and four-square play area, and barbecue and picnic areas."

Hight said the City of Wasco and the Recreation and Parks District held a joint board meeting on April 18 at which park renovations were discussed.

"This has been six months in the making," Hight said. "We are hoping we are funded with the grant to really make a complete change at Cormack Park for our community." 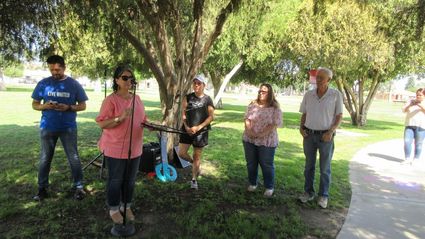 Recreation and Parks District Manager Vickie Hight addressed the gathering sharing some of the district's plans for the future of Cormack Park.

Hight also said the department is in the public comments portion of the grant process where residents are asked to share their thoughts and ideas of how to make the park better, with an email or by stopping by the office and talking with staff.

"We would love to hear from the community about what they would like to see in Cormack Park," Hight said.

Hight shared that Aera Energy and United Way partnered in this endeavor.

Volunteering through United Way was 12-year-old Haydn Chambers from Stockdale Elementary, who is headed to Actis Junior High in September.

Chambers was serving at one of the stations.

"We assembled the posts and signs," Haiek said. "Kids and residents showed up and helped paint the sidewalks. We all had a great time working together, sharing ideas and enjoying meals together. The teamwork was fun."