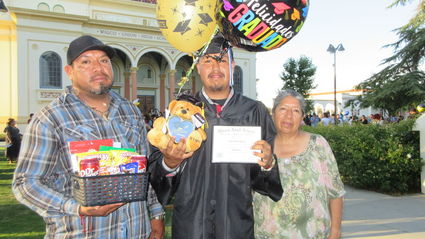 The graduates were all seated in the front rows of the auditorium waiting to be walk across the stage. For many, it's been a long struggle to reach this milestone, and for others it's just one step further in preparation for their future.

Katie Moreno sang the National Anthem for the attendees.

The first student presentation was given by Independent Studies Program student Jocelyn Rincon, who spoke about how grateful she was for the independent study program that helped her achieve her needs as a young mother, and her message was that no matter what you past dramas have been, you need to continue forward.

The next student to address the attendees was the Continuation Program's Salvador Garay, who was grateful for the opportunity to be able to attend the school to become a better person.

The final student speaker from the Adult School was Miguel Aguayo, Sr. who shared his story about hating school.

"Three years' ago, I couldn't read, write or speak English," Aguayo said. "I went to school to learn."

Aguayo's message to his classmates was to never give up and never let anyone tell you that you won't make it. "Never forget your friends," he added. 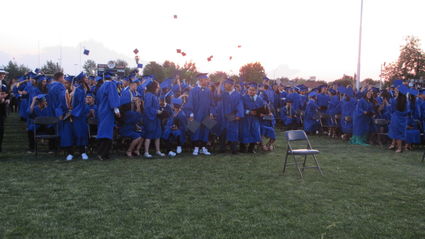 Principal Martin Lonza addressed reminded the students that Independence High is here for them. "This is your school," Lonza added. "Look ahead and plan for the future. Set a goal and reach your goal."

He also told the graduates that they will hit some rocks in their road, but to just go over the rocks and move forward.

"Don't stop because of some bumps in the road," Lonza said. He urged each student to go forward.

After receiving their diplomas, the students gathered on the outside lawn to take pictures and chat with friends.

Graduate Anel M. Rubio Villalobos and her twin daughters just moved to Arvin with her boyfriend, Jose Nunes, and she plans on attending Bakersfield College to study nursing and would eventually like to be a registered Nnurse.

Another graduate, Erik Ferrer Chacon, will continue his education to be a correctional officer.