A focus on 'hard work' 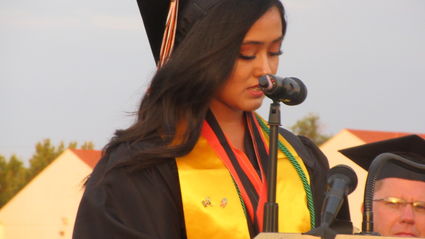 Telling the graduates her best advice was to "work hard and do the very best that you can," Superintendent Lori Albrecht had all the students graduating with an associate degree from Bakersfield College along with their high school diploma stand and be recognized for their hard work and dedication.

The first student speaker was Valedictorian Veronica Garcia, who recommended to her classmates that they continue to work hard, saying "We worked hard for all we got."

Salutatorian Christian Figueroa, recipient of the Bill and Melinda Gates Foundation Scholarship, also addressed his classmates and shared that each would fail at something in life, but everyone can overcome their failures and become successful. His speech projected a tough reality for all, but in the end, there would be success. In other words, life is tough but hard work will persevere.

In addition, Wonderful Academy College Prep graduate Monserrat Juarez thanked everyone who made it possible for her to succeed as much as she has.

"I set a goal of becoming valedictorian after eighth-grade graduation," WACP Valedictorian Meagan Ocampo said. "I was the salutatorian and didn't get to give a speech, but I finally made it to valedictorian and I get to make a speech." Ocampo encouraged her fellow graduate to work toward their goal and never giving up.

Albrecht congratulated the senior class on pulling "the best prank ever" – covering the campus with photos of Principal Kevin Tallon's face.

Shoutouts were heard throughout the field as each student's name was called to accept his/her diploma.

Traditionally, the junior girls acted as row guides for the graduates and sat at each end of every row. The practice started so junior girls could experience a taste of participating in a graduation ceremony, and will know what to expect when it's their turn.

Principal Tallon told the graduates, "If you can't run, walk, whatever you do, keep moving forward."

Tallon presented the diplomas and Board Trustee Sharon Nicol accepted the Class of 2019.

After the traditional singing of the Alma Mater, the students were told to move their tassels to the other side of their caps, signifying their new graduate status.

Band Director Greg Sparks led the WHS band in the processional "Pomp and Circumstance," and Paul Grizzell closed the ceremony with the Recessional.

After graduation, new high school and college – she was among the students that received associates degrees --graduate Victoria Bernal was asked what the best thing about Wasco High was. 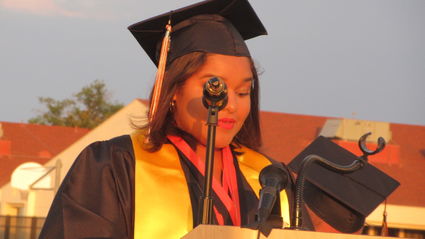 "The best thing about Wasco High is definitely the people I've had the opportunity to get close with throughout the years," Bernal said. "I'm so glad I've had the chance to create great relationships with great people that I will never forget.

When asked what her plans for the summer included, she responded that her summer will be pretty busy as she plans on taking college summer courses, going on a mission trip to New York with her church and preparing for the cheer team at Azusa Pacific University.

Bernal is looking forward to school at APU, where she'll be majoring in cinematic arts.

Her father also had some thoughts.

"As parents, it's really a series of bittersweet moments," Juan Bernal said. "Part of us wants to hold onto our baby girl, yet we know and realize that she has a calling to fulfill. We're blessed and excited for the next chapter to come."