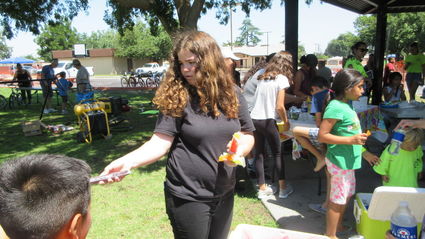 About 100 kids and a large group of adults participated in this year's Bike Rodeo.

The Bike Rodeo was held on Tuesday at Barker Park and was hosted by the city's Code Compliance department.

"This event is special to all the Wasco code officers," Code Compliance Officer Sergio Gonzalez, Jr. said. "It's a great opportunity to teach kids bike safety and give away brand-new bikes."

A large group of adults volunteered for this special event. Each child received a free helmet, reflective decals, a raffle ticket for a bike and many free giveaways at the different stations.

Parents and kids were given a great time away from the bike stations with demonstrations provided by Kern County SWAT, KC Bomb Squad, KC Crime Prevention, KCFD, Hall Ambulance and Wasco Public Works.

The event concluded with a free lunch for everyone, and 18 bikes were raffled off.

"The Bike Rodeo has turned into a great way for Code Compliance to reach the community, and the community definitely enjoys the rodeo," Gonzalez said.

Code Officers Gonzalez, Matt Maldonado and R. Villarreal dedicate weeks to preparation, knowing the kids will be safe and get a joyful start to their summer break. The Bike Rodeo emphasizes bike safety while riding on public streets. 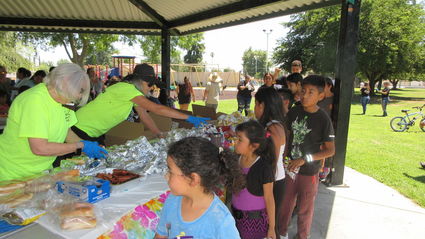 At the event, one station taught kids to look both ways while leaving their driveway, another taught kids how to ride through an intersection, and a third provided a review of arm signals and controlled riding.

Additional stations registered bikes with the Kern County Sheriff's Department, plus the kids were provided a closed-off street to race against each other.