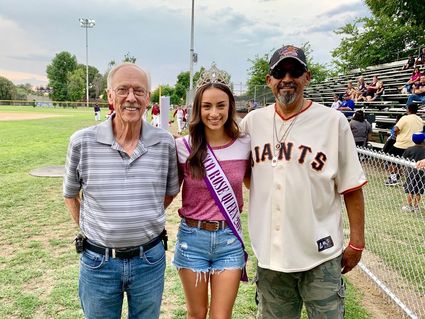 Wasco welcomed its first professional baseball team ever Saturday night with the Reserves first home game at the Ballpark.

Music from the press box filled the stadium. The lights lit up the diamond at dusk. The field was ready, the teams were lined up and after presenting the colors, the VFW led everyone in the Pledge of Allegiance and Rocky Garza sang the Star Spangled Banner prior to the first pitch being thrown.

The Bakersfield Train Robbers were up first, with about 75 spectators – along with a number of latecomers – looking on.

Recreation and Parks Director Vickie Hight was on duty coordinating the concession stand where a full menu was featured, including hot dogs, Frito boats, sodas, water, nachos, candy and coffee.

Kids ran back and forth to the concession stand constantly during the game, with hot dogs the most popular food item.

There were a lot of laughs when the Reserve mascot, played by Shawn Robinson, danced to "YMCA" in front of the bleachers. The mascot also performed the Chicken Dance, too, helping to rouse the spectators.

Three boys played a game where they rested their heads on the tops of bats and spun around. All three were pretty dizzy after this exercise.

Kenny Newman won the raffle drawing for a Reserve pullover.

The highlight of the game was the enthusiasm of the attendees and how excited the kids were to have a professional baseball team in their hometown for the first time in history.

"I love baseball," Danny Rueda said. "I'm a ball player and I could watch games every day."

"I think it's cool to have a team in Wasco," said 11-year-old Dustin Velasco from Palm Avenue School. "I think they have a chance to make it into major league baseball."

Even though 9-year-old Juan Rubio is moving out of state, he thinks it's a great idea to have a team in Wasco, too.

Seventh grader Bryan Carranza has been excited that a baseball team is in town.

"I think the game is fun and is great because it gets everyone to go outside instead of inside playing video games," Alex Carranza said.

Some in the crowd were hoping they could do more than watch.

"The oldest we can be to play baseball is 12 years old," Leila Adams said. "We need something to do during the summer. I would play on a team."

"I agree," Guadalupe Star Casado said. "We need activities for 17 years old and younger. There is nothing for us."

Reserve player Alex Hernandez's parents, Jim and Lori, traveled to Wasco to surprise their son at his first home game.

The Hernandezes drove from Goodyear, Ariz., to Wasco to watch Alex's game and immediately turned around for home late Saturday night because Jim Hernandez had to be at work early Monday morning. 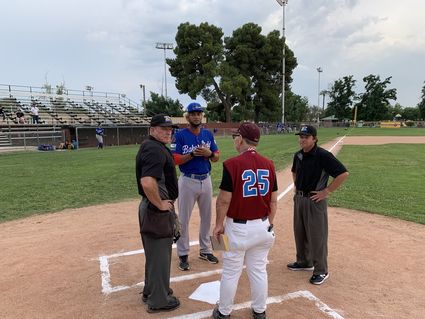 "We flew to Kansas for his first game during his first season," Lori Hernandez said. "We try to make as many games as we can."

Alex Hernandez works for a beer distributing company back home, and his mother explained that he would go back to it after the season is over.

While the evening was enjoyable for Wasco Reserve fans, the Reserves lost to the Bakersfield Train Robbers, 5-3.

During this past week, an additional player was added to the Reserves roster before the game on June1.

Scott Robert "Scotty" Martinez, 24, arrived from Las Vegas. Martinez was in Spring Valley Little League, was an all-star for four years during high school and attended San Diego City College and the University of Colorado at Colorado Springs.

Martinez is playing outfield for the Reserves.