A place for everyone at Planet Dance 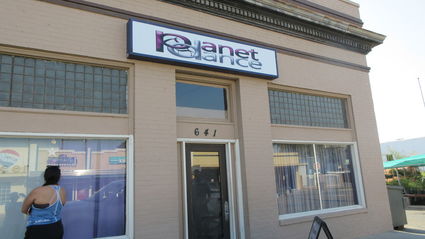 Small family businesses are everywhere in Wasco. Some have been around for several years, such as Jerry's Pet Feed and Blue Sushi, while others are new to the area, such as Delicias Sinaloenses Ice Cream Shop and Sweet 7th Street Cookies and Cupcakes.

The owner of Planet Dance is Corine Matera, who also owns Planet Dance Boutique in Bakersfield at 4909 Stockdale Highway.

Matera's daughter, Jill Jimenez, and son, Jacob Hernandez, both run the studio in Wasco while their mother runs the boutique.

Jimenez has a history of performing, as she was a cheerleader for Lincoln High School in San Jose, Calif., cheered at San Jose State and participated in dance programs. She has two boys who participate on traveling sports teams.

"My boys travel all year long," she said.

"We feel that dance can be for everyone," Jimenez added. "No one should be turned away."

Jimenez pointed out that Planet Dance accepted a special needs student when other dance studios rejected her.

"We were the only studio around where a mother with a special needs daughter could sign her up for classes," Jimenez said. "She tried to enroll her daughter at several dance studios in Bakersfield and was told no at each one. This student is going on her second year at Planet Dance."

Jimenez added that the studio has four teachers. Miss Veronica and Miss Vickie are two of the dance teachers at the studio, along with Jimenez and Hernandez.

Jimenez said Jacob teaches all the tap classes, the combination classes (for younger students) as well as performing arts classes and hip hop level 2 and 3.

"I teach ballet from ages 1 to 4, beginning jazz 1 and 2, and beginning hip hop," she said. "All the teachers collaborate on the competition routines."

The dancers compete at KAR, Radix, Hollywood Vibe and Velocity competitions, and they have traveled to Las Vegas to compete.

Planet Dance is a family run business that, so far, has done well in the Wasco community with a total of 120 students.

"My mom's vision was to open up year round," Jimenez said. "Once we had our Christmas recital, we wanted to showcase our students' talents mid-year, so we created the Mid-Year Gala." 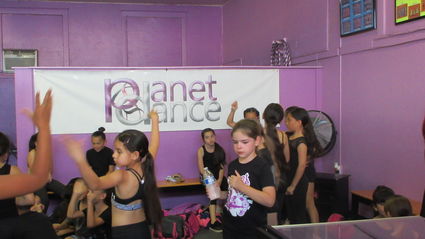 Students warming up, waiting for class to begin.

For this event, the dancers are able to create their own costumes to go with the theme of their music instead of having to purchase a new one.

Jiminez says the family tries to keep costs down for families. Tuition at Planet Dance hasn't changed much since the school started. When it opened, tuition was $40 a month, and it was recently raised to $50 a month.

Costumes have always been $125. "My mother insists we keep the costume prices the same since we began," Jimenez said.

Both Hernandez and Jimenez have careers outside of their passion. "Real life costs more than what dancing pays," Jimenez said, "so my brother is a cosmetologist and I'm a counselor."

Jimenez said her brother does a lot of freelancing, photo shoots and weddings.