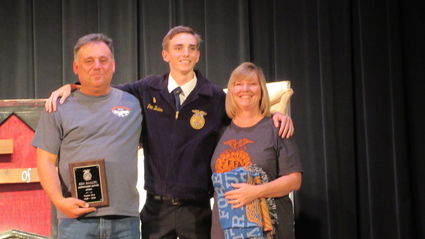 The Outstanding Service Award was given to Ken Ballou and Mother of the Year to his wife, Christie Ballou. All pose with FFA member and son Jonathon Ballou.

Wasco High's Future Farmers' of America held its annual Friends and Family Banquet on Friday, May 17, in the auditorium.

Outstanding students were recognized and awarded certificates for their contribution to the FFA program.

The Outstanding Service Award was presented to Ken Ballou.

Ballou accepted his award as his family looked on and his wife, Christie Ballou, was named Mother of the Year for her outstanding service to the FFA family. Student Jon Ballou joined his parents on stage after they received their awards. 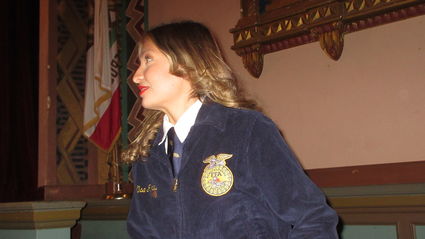 A slide presentation of the board members was also shown, and when pictures of the members when they were younger came up, there were lots of laughs and clapping.

After the awards were presented, the group broke up and gathered in the cafeteria for refreshments.