Burglar takes his time, and gets caught 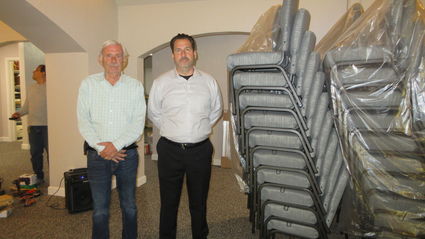 Rick Woody, Sr., and Rick Woody, Jr., standing by the new chairs they recently purchased for their renovation.

The Peters Funeral Home in Wasco was burglarized twice in the same day by the same person, the owner says.

"We think he broke into the building early Saturday morning. He must have seen that that our large items were taken down from the walls for our renovation, and returned later that afternoon to take what he didn't get the first time," owner Rick Woody, Jr., said.

Woody and his father, also Rick, were in the process of dismantling television sets off their wall mounts to continue working on the renovation project.

The two arrived at the funeral home Saturday morning and realized they had been burglarized and called the sheriff's office.

Several items were stolen, including a TV set, a computer, the sound system and lighting.

"Saturday afternoon, when we returned to the building, we actually caught the burglar red-handed," Woody, Sr. said. "He already had another TV set on top of a blanket that he found in the garage and was ready to wrap it up and steal it, too."

According to both men, the burglar had broken through two locks to get inside.

"We didn't realize he was still inside the building robbing us," Woody, Jr. said. "I surprised him, and when my father came into the room, the burglar was surprised twice." 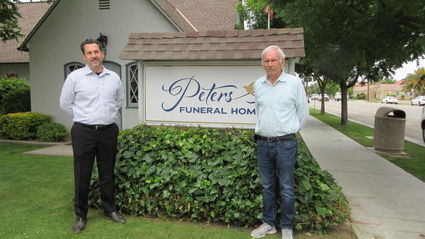 Rick Woody, Jr., and Rick Woody, Sr., standing outside on the front lawn of the funeral home.

"After we caught him in the act, an altercation took place," the father said. "My son had him in a headlock and I was holding his feet. He seemed normal when we first caught him; however, as the minutes went by, he began talking in circles like there was something wrong with him."

Both men stated that the struggle lasted a very long 10 minutes, and luckily no one was badly hurt. The father was dragged on the floor, which caused an injury to his elbow.

They told the burglar they wouldn't press charges if they could get the stolen items back. The burglar then told them where they could find their things, which they did.

A second phone call to the sheriff's office resulted in 14 officers showing up at the business to apprehend the suspect, who was not immediately identified.