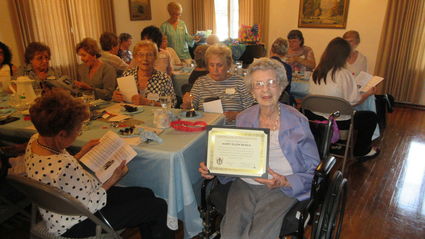 Mary Ellen Rexius holds up a proclamation she received from the Woman's Club making her a lifetime member.

The Woman's Club helped one of its members celebrate her 100th birthday a few months early.

Mary Ellen Boyd Rexius officially reaches her centennial in July, and club members wanted to honor her and recognize her accomplishments during different milestones in her life, as presented by member Cheryl Woody.

Club member Sharon Voth entertained with songs reflective of those times. Voth was accompanied by Priscilla Neufeld on the piano.

Rexius was born in the small town of Alton, Mo., and was the only child born to parents Charles and Pearl Boyd.

Rexius was educated in Missouri schools and taught third grade there for seven years before deciding to move. During her summer months, she was usually in summer school, but one year she and three other teachers worked in the war industry in Kansas. While there, she earned the title "Rosie the Riveter."

1947 was one of the hottest summers on record, and that's when Rexius arrived in Wasco by train. She chose to live in Wasco by answering an ad in a Memphis, Tenn., newspaper that was recruiting teachers for Kern County. It was a decision she says she has never regretted.

She taught third grade; club member Linda Dieter was in her third-grade class.

In 1949 Boyd had a blind date with Ray Rexius for a 20-30 Club dinner at Cawalo. Rexius had just returned from serving in the Navy and went to Wasco to join his sister in the Wasco Studio and Camera Shop.

Rexius helped her husband in the studio by color tinting graduation and wedding photographs. She participated in their son's activities as he grew up, until he left for college in 1973.

Direct color film had become popular, which meant she didn't have to color tint photographs any longer. Because of that, she accepted a job teaching at Wasco High School and spent 13 years enjoying the staff and students. 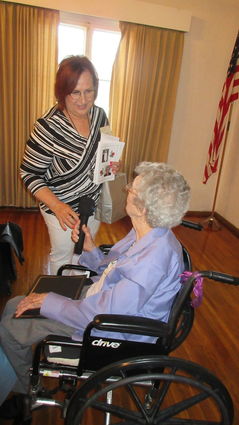 Following her teaching, she served on the grand jury for two years.

In 1985, her husband sold the studio, and they began traveling. Grandson Jacob Rexius was born in 1982, and visits from their grandson kept their retirement years lively.

Currently, Rexius enjoys memberships in the Rose Society, Historical Society, P.E.O. Sisterhood and Grace Community Church. She's been a member of the Wasco Woman's Club since 1950.

She was honored to serve as grand marshal of the Rose Festival in 2005.

During her years, she has suffered two major losses. Her husband died in 1999 and son Michael in 2015.

What does she want to remember about her life? Her thoughts turn to family memories, good health and good friends.