Remembering Those Who Gave Their Lives For Our Freedom 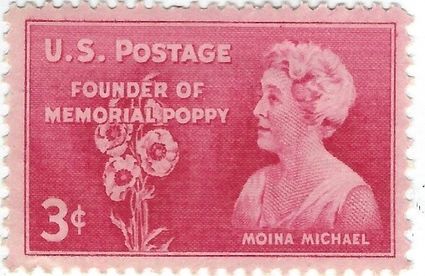 In 1948, the US Post Office Department honored Moina Michael with a commemorative stamp as the founder of the Memorial Poppy.

Behind every artifact in the museum is a story. We have in our collection several red silk or paper poppies sold by the VFW or the American Legion. As we approach Memorial Day I thought it well to tell their story. For many years I remember, Cathy Morgan as the local poppy lady. Now I am sure they were many others distributing poppies as well, but it was Cathy who always seem to find me in a restaurant or on the street, and for a small donation I was given a poppy to wear on my person to remember those who gave their lives for our country.

In 1915, Canadian Lieutenant Colonel John McCrae wrote a poem, which describes how red poppies grew over the graves of fallen soldiers in France. In November of 1918, an American professor, Moina Micheal read the poem, titled, "We Shall Not Sleep" in the Ladies Home Journal. She was so moved by the poem that she vowed to wear a red artificial poppy in remembrance of those who gave their lives and wrote a response poem. Following on the left is McCrae's poem and Michael's response below.

We Shall Not Sleep

In Flanders fields the poppies blow

Between the crosses, row on row,

That mark our place; and in the sky

Scarce heard amid the guns below.

We are the Dead. Short days ago

Loved and were loved, and now we lie,

Take up our quarrel with the foe

To you from failing hands we throw

The torch, be yours to hold it high.

If ye break faith with us who die,

We shall not sleep, though poppies grow,

We Shall Keep the Faith

Oh! You who sleep in Flanders Fields,

We caught the torch you threw

And, holding high, we keep the Faith

With All who died.

We cherish, too, the poppy red

That grows on fields where valor led;

It seems to signal to the skies

That blood of heroes never dies

But lends a lustre to the red

Of the flower that blooms above the dead

And now the Torch and Poppy red

We wear in honor of our dead

Fear not that ye have died for naught;

Michael purchased 25 silk poppies, put one on her coat and distributed the rest at the YMCA convention that she was attending in 1918. She soon began campaigning to get the poppy adopted as a national remembrance symbol. Anna E. Guerin, visiting from France, took the idea back to Europe, where paper poppies were sold to raise money for orphaned children and widowed women. The red paper poppy was soon adopted as a remembrance of the fallen soldiers in WWI and became widely distributed in most of the Allied Countries.

In 1948, the US Post Office Department honored Moina Michael with a commemorative stamp as the founder of the Memorial Poppy.

The American Legion –The Memorial Poppy 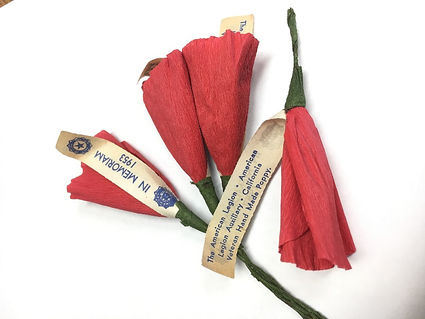 The first national distribution of poppies in the U.S. occurred right before Memorial Day in l922 by the Veterans of Foreign Wars of the United States (VFW). It soon became the official memorial flower of the VFW. The VFW arranged for the poppies to be assembled by disabled or needy veterans who would also be paid for their work. The veterans nicknamed the silk flowers, "buddy flowers" in remembrance of their buddies who had given their lives in the war. In 1924, the VFW trademarked the "Buddy Poppy."

In the year 1989, the VFW sold almost 18 million poppies for an average donation of 55 cents, and has sold over three quarters of billion buddy poppies since the program began. As with the American Legion, proceeds from the flowers go for the aid, assistance, relief, and comfort of needy or disabled veterans, and their dependents, and the widows and orphans of deceased veterans. According to the VFW, "It's all about veterans helping veterans and living up to VFW's motto of "Honor the Dead by Helping the Living."

This Memorial Day, remember those who gave their lives for our country and if a poppy lady asks you for a donation, make one, and wear the flower in remembrance.