New limits on holding back kids 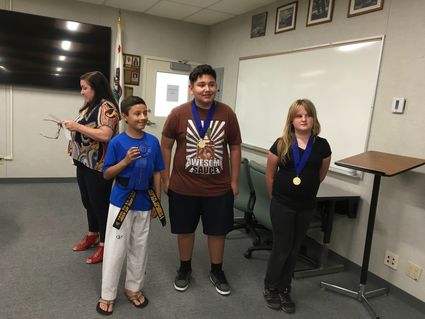 Eighth graders will not longer be able to be retained – or "held back" – under new county policies, WUESD Superintendent Kelly Richers told the school board Tuesday night.

The basis for retention, Richers explained, is proficiency in reading, language arts and math.

"The district must meet with the parents before Christmas break if a student is in danger of retention," he said, adding that a second meeting regarding the student should be held by the end of February and a decision must be made by the end of April.

"Currently, the district does not have firm guidelines," Richers said. "We need to put these into place before next fall."

New policies involving insurance coverage for volunteers will be initiated in the Wasco Union Elementary School District for the next school year, too.

Richers told the board that he received correspondence that day that stated the board had to have a resolution signed that will enable all volunteers to receive workman's compensation if they are at the district in any capacity.

"It they get injured while volunteering, it's the same as if an employee was injured, Richers said. "A signed resolution must be into the county by June 3 granting volunteer workman's compensation."

The board unanimously approved a resolution granting volunteers workers compensation while on campus.

"If this resolution is not approved and signed and the resolution to the county before June 3, the volunteers will not be able to collect anything if they are hurt on the job," Richers emphasized.

Rogers introduced students who shared their science fair projects with the board members.