Fun for all at NK Christian Carnival 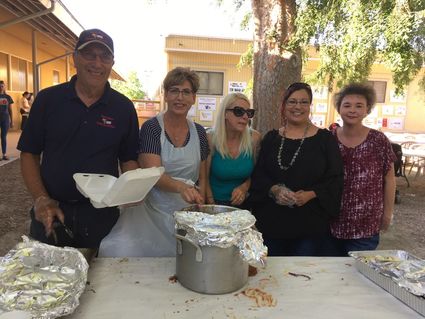 May 4 was a fun-filled Saturday in Wasco with a barbecue in the early hours and a carnival in the afternoon hours.

In a large room tables had several auction items on top of them. Bid sheets were placed by each item and a beginning dollar amount was placed on each sheet.

Coordinator for the fundraiser was Julie Rodarte, who has been a teacher at the school for several years. She currently teaches the fifth/sixth-grade class.

"Even though we moved to Bakersfield last year, I would still drive my children out here to school," Rodarte said. "My oldest is a junior at Liberty High School, and he went through North Kern Christian."

"When we started bringing our kids here, we lived In McFarland," Rodarte said.

Rodarte added that she chose North Christian School for Christian teachings and the high level of academics. "I love the class size," she added.

There are currently 49 students at North Kern Christian School and four of those students are going to graduate in June.

"The students seem to like this way because they get the same teacher two years in a row," she said.

One of her favorite experiences is when her students "are able to see Jesus." Paul Neufeld holds one of his wife Judy's strawberry pies.

"When a student sees or experiences something extraordinary, I ask them if they saw Jesus," Rodarte said. "They love when I ask them."

Another long-time family is the Garcias. Veronica Garcia shared that her father in law was a founding member of the school board. "My husband, Danny Garcia, was one of the first students to go to kindergarten through eighth-grade here," Garcia said. "My mother in law taught second and third grades for 11 years."

The Garcia family is deeply involved in North Kern. "I feel the school is very family oriented," Garcia said.

Sharing his wife's pie was Paul Neufeld, whose wife Judy baked all the strawberry pies that were auctioned off.

One of her pies sold at a live auction for $400 Saturday afternoon.