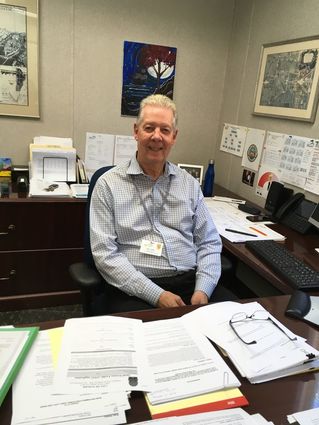 Most people are probably not aware how well-traveled the city's planning director is, that he is the father of triplets and has experience in many different areas that incorporate construction and architecture.

Planning Director Roger Mobley has been with the City of Wasco for seven years and in his lifetime, he has traveled to Dubai, Australia, Afghanistan and Argentina.

Born in Los Angeles, Mobley moved to northern California and graduated from San Jose State University. After graduation, his first job was with the planning department of San Jose. He then worked for several large engineering firms.

Mobley has lived in Kansas City and also was acting planning director for the City of Mendocino.

When it was time for him to return to southern California, he looked around and saw the job in Wasco was available. He applied and was hired.

Mobley is in charge of community development, which means planning, building, code enforcement and grant writing. "I'm lucky to have such great staff in the city," Mobley said. "I work closely with Senior Planner Keri Cobb, Chief Building Inspector Marlo Glaser, Code Compliance Officers Matt Maldonado and Sergio Gonzalez, and Grant Writer Sally Livingston, as well as some others."

Mobley's community development activities and projects include land development – including single-family homes. "Most of the tentative tract maps that were approved just prior to the housing recession in 2008 have expired," Mobley said. "Two subdivisions with final maps and finished lots (about 200 lots) are currently building out, with no new subdivisions filed at this time."

One of the most recent successes is that Walmart received approval from the landlord to allow Panda Express to locate in front of their store. "The city has been working on this project for several years," Mobley added.

For several years, there was a conflict with the property owner of Walmart, which restricted where building could go on the Highway 46 frontage.

Another big project that Mobley has been working on is the farmworker housing relocation. Because of the High Speed Rail Project, the farmworkers were relocated to a different location within the city. "Most of the residents moved to the new housing by the end of February," Mobley said.

Mobley would like to see more variety and choices for residents in Wasco. One of his goals is to attract additional retail into Wasco.

Additionally, Mobley has experience in architectural firms and with builders and developers.

"It's hard to find experienced people to build a whole team," Mobley said. "Small cities like Wasco don't have big staff from which to draw."

Mobley wishes there was more development and recreational facilities such as a bowling alley in town. "Wasco needs to have quality of life," Mobley said.

Mobley added that there is a limit to what is available to people in Wasco.

Mobley enjoys being in Wasco and loves working in the smaller agricultural communities.

While Mobley doesn't have a lot of spare time, he treasures the 30 years he's been married to Barbara and enjoys his children. His daughter is married and one of his sons is a software engineer. His second son is working part time.

His favorite destination is Bora Bora, which is not fully developed. He enjoys the openness of the tropical island and especially the blue water.