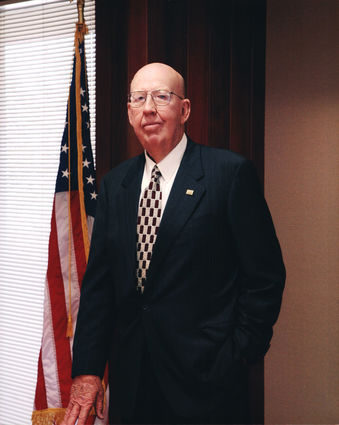 Today we mourn the loss of a great man, Fred Starrh, patron of the arts, sciences and his church, lover of his family and community, local farmer and an approachable, larger-than-life friend to many people across the nation. Fred slipped peacefully from this world on the evening of April 16, 2019 at the age of 89, at home while under the care of his wife, Linda Starrh.

Fred was born in Arizona on June 15, 1929 of humble circumstance, the youngest son of a family growing cotton in Pima County near Tucson, Ariz. Then, in 1935, his parents, George and Mary, moved to a 30-acre patch of sandy earth near the town of Shafter.

Fred grew up in the shadow of the depression and the Second World War. When his draft card was called during the Korean War, he obliged and was stationed at Fort Lewis in Washington State for two years. It was while stationed in the Army that he met Nancy Johnson, who would be his wife and partner of 54 years, and mother of his four children. Losing Nancy to cancer in 2009 was a deeply tragic moment in Fred's life. In 2010, Fred found joy again with his marriage to Linda Colvard.

During his long, 68-year farming career, he was also heavily involved in the national and local cotton industry while cotton was still a major commodity in California and was involved in local agricultural water districts and grower cooperatives. He also served as chairman of the nonprofit cotton marketing association, Cotton Incorporated, where he played an instrumental role in merging the interests of Cotton Incorporated with the National Cotton Council -- two distinct but now more closely aligned industry entities. That involvement frequently took him around the U.S. and to other countries, and he made many life-long friends along the way.

More than just a farmer, Fred served his community for 17 years on the board of the Kern County High School District. He had also served his town as a trustee of the Richland School District of Shafter, as a founding member of the Shafter Recreation District, and as a leading supporter and participant in local theater, music and art programs.

For his service, Fred received many accolades during his career, which are too numerous to list in full. He was moved by the Kern High School District's decision to name the Shafter High School auditorium in his honor, his inclusion in Cotton Incorporated's industry Hall of Fame, the nominations made by his friends for Co-op Farmer of the Year, Shafter's Ag Man of the Year, Farmer of the Year, Western High Cotton Award, his recognition by the American Society of Agronomy, and many more.

Fred's faith in God was strong. He loved singing in the choir at the Shafter Congregational Church, where he, his parents and his children were members for a large part of their lives.

Fred's family extends their heartfelt appreciation to all of his friends and supporters. We invite you to join us as we celebrate his life with music and remembrance on Sunday, April 28, 2019 at the Mennonite Brethren Church, 400 Kern Street, Shafter. Services are scheduled to begin at 4 pm.

Memorial fund donations may be made to the Congregational Bible Church of Shafter.