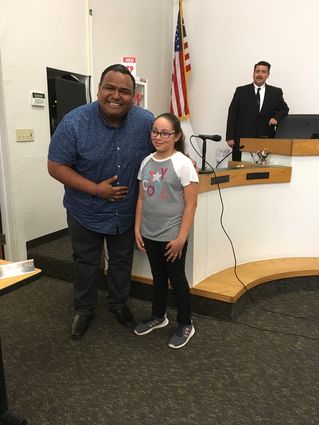 The city will have a new permanent Public Works director, but it won't be a new face around City Hall.

"Biridiana Bishop has been working in the position as acting public works director since Jan. 2019," Ortiz-Hernandez said. "She will coordinate the activities of the department. Public Works is the largest area of the city's departments and operations, with seven divisions consisting of Water, Wastewater, Sanitation, Streets, Animal Control, Vehicle Maintenance and Facility Maintenance. With such a wide breadth of services to be responsible for, it is crucial to have a director who sees the big picture."

Bishop will receive a salary of $115,000, effective immediately.

In other matters, the council accepted the written report made by the Kern County Grand Jury in which several areas were recommended for the city to review and respond:

[BOX] Wasco has had frequent turnovers in key leadership positions within city government. The Grand Jury feels that the frequent turnovers will prevent the city from reaching long-term goals, and recommended the city hire a consultant to do a study on why the turnover is so high.

[BOX] The city's website is not user-friendly, and finding some information was difficult.

Ortiz-Hernandez agreed with this comment and advised the council that the city is working on the website. "I've also had problems getting information that I need," he said. 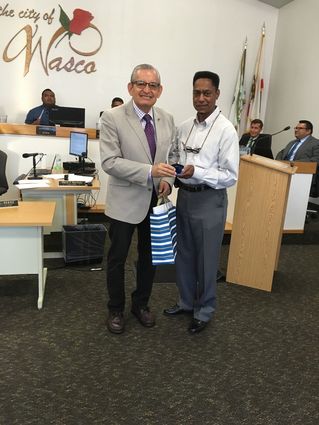 Ocie Crawford presented Gilberto Reyna with certificate applauding his time as mayor of the city.

Ortiz-Hernandez responded that with the vacancy in the finance director's position, completing the audit has taken longer than necessary; however, it is currently being completed.

[BOX] While Wasco has been known as the Rose Capital of the World, due to the lack of water, this title has all but disappeared.

The city manager recommended that the city spend money on hiring a water consultant for this issue.

In a follow-up to a proposal that would allow each council member to grant $2,000 to qualifying nonprofit groups, the council agreed to rework the wording and then bring it back to the council at a later meeting.

Leading the meeting in the Pledge of Allegiance was Palm Avenue student Giselle Torres, child of Octavio and Tania Torres.

Ocie Crawford, of the True Love tribes of Bakersfield, presented Gilberto Reyna with certificates in appreciation of his dedication and ability to unify the city while he was mayor.