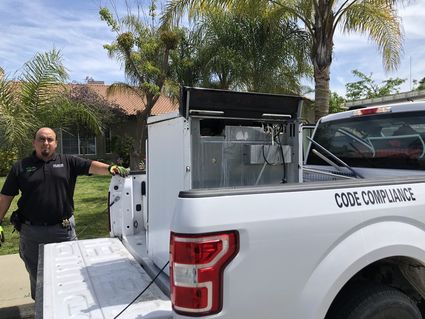 Code compliance officers are what keep the city adhering to the municipal codes that have been adopted by local government.

Sergio Gonzalez is one of two Code compliance officers for the city of Wasco; the other is Matthew Maldonado. The two work closely together and were instrumental in the recent Community Clean-up held Saturday at Barker Park.

Gonzalez is a born-and-raised Wasco resident, as is his wife, Isabel. They live in town with their two children, a boy and a girl.

After graduating from Wasco High, Gonzalez went to work for Bank of America, beginning as a teller and working his way up to a personal banker. He did that for six years.

When it was time for a change, he left BofA and worked for a Ford dealership in Shafter. That job lasted until the dealership closed; then he returned to the bank

There was an internal pull inside Gonzalez leading him toward a career move in which he would be able to give back to the community in which he was raised. He applied for a position as a code compliance officer in Wasco and was hired. So far, he's been with the city for about five years. "I thought it would be good to work in the city where I grew up," Gonzalez aid.

Gonzalez describes his job as mainly property management within the city. "We drive up and down the streets and check up on whether or not the properties are being correctly maintained," Gonzalez said. "We make sure there are no weeds overtaking the yards, no debris piled in the front yard and that there are running utilities in each residence."

In addition, Gonzalez stated that code compliance officers keep a look out for rodent infestations. 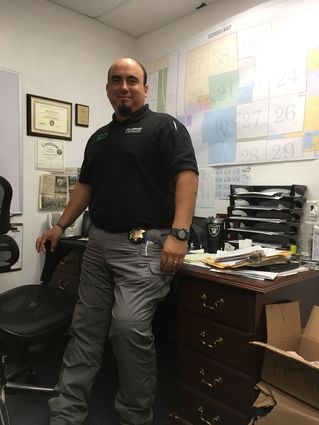 Sergio Gonzalez relaxes in his office after a successful community clean-up.

"If a resident is experiencing difficulties, we have a list of agencies we can refer them to," Gonzalez added.

For Gonzalez, working for the city of Wasco, his family and his faith are what keep him motivated to continually give back.

In addition to his job, family and faith, Gonzalez has a love for baseball – Dodger baseball, that is. Prior to getting married, he and his wife toured baseball parks around the United States. He can say he's been to Wrigley Field in Chicago, Fenway Park in Boston, Yankee Stadium in New York (before they tore it down) and several others.

"We did the traveling before we had kids," Gonzalez laughed.