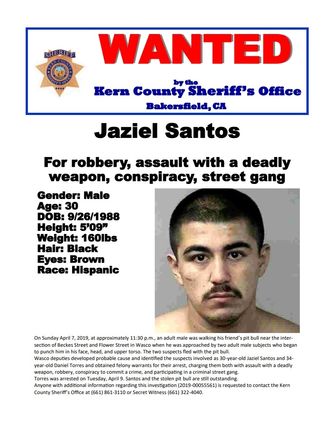 One of two suspects in an assault and kidnapping of a dog was arrested last week, and the other man is still at large.

On Sunday, April 7, at about 11:30 p.m., two adult male suspects encountered a male walking a friend's dog. According to deputies, the two suspects began to punch the victim in his face, head and upper torso.

The incident occurred at Beckes Street and Flower Street, and the two suspects fled with a 5-to-6-month-old blue nose female pit bull.

The victim was treated at a local hospital for the injuries he received during the robbery.

Deputies were able to identify the two suspects as 30-year-old Jaziel Santos and 34-year-old Daniel Torres. According to the sheriff's office, a felony arrest warrant was issued for their arrest, charging them both with assault with a deadly weapon, robbery, conspiracy to commit a crime and participating in a criminal street gang.

On Tuesday, April 9, Wasco deputies located Torres at Barker Park and arrested him without incident. Shortly after, deputies served a search warrant at his residence in the 1600 block of Poplar Avenue. During the search warrant's execution, deputies located gang indicia – a printed message -- a stolen firearm and approximately one ounce of heroin and evidence of narcotics sales. Torres was booked into the Sheriff's Office Central Receiving Facility for his felony warrant in addition to various weapons and narcotics violations.