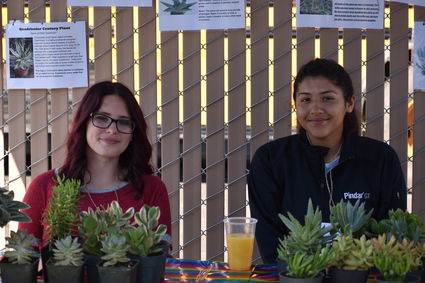 The Wasco Chapter of Future Farmers of America held its Plant Sale and BBQ on Saturday, raising funds for their activities and competitions.

Advisor Anthony Farao said that the Wasco Ag Boosters Club worked very hard to make this event a success. All of the plants for the sale were grown by the students, with a great variety to choose from. President Christy Ballue said that the event makes it possible for the club to get involved in many different activities that prepare students for agriculture-related careers.

Two students who were manning the plant sale booth say that the club has given them great experience for their school careers, not just in agriculture. Karissa Andrade, who is in her first year in the club, said, "I have got some good experience in public speaking, competing in the opening and closing, and in the judging competitions."

Attendees were treated to a barbecue lunch of ribs, rice, salad, roll and a cookie.

The club has been very busy with competitions, as well as a trip to the state Capitol. A group of students boarded a train for Sacramento and celebrated Ag Day in Sacramento. The trip included a tour of the Capitol, as well as a chance to see a legislative session.

The Wasco FFA is one of the largest clubs on campus, with over 400 members involved in numerous teams, such as animal and plant judging, animal exhibitors, ag mechanical, horticulture and crop sciences.

The club has had a very busy week, with a birth event happening on March 27, when the club's school sow gave birth to several baby piglets. Farm Manager Leo Medina and Denise Morales helped give the students an experience that they will remember for a long time. The students had an up-close look at the birth as they helped Medina with the big event. 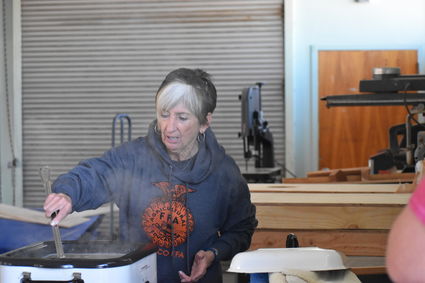 Betsy Rogers, of the Wasco Ag Boosters Club, prepares rice for the barbecue.

Jessica Carcuera, who has shown lambs at the Kern County Fair, said that this year she might change it up. "I am thinking about going for a steer this year." Steers are one of the most time-consuming and challenging of the animals, but potentially one of the most profitable.

Farao also said that he has some students that are in the process of transitioning from the Poultry Division to other small-animal divisions for this year's fair. Recently, the Kern County Fair Commission decided that there would be no Poultry Division at the fair this year due to recent outbreaks of Newcastle disease. The disease is fatal and can infect an entire flock of birds with just one ill chicken

"It is disappointing for the students that we have showing poultry, but we are transitioning them into other small animal divisions for the fair, such as rabbits," Farao said.