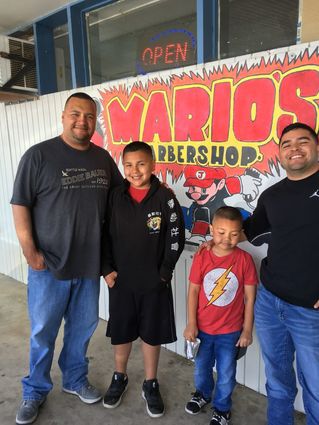 From left, Santos Perez, Jr. is with Mario Fernandez outside the barbershop.

A local barbershop in town caters to its clientele by keeping up to date on the newest haircuts.

Mario Fernandez has owned Mario's Barbershop, located at 1336 F St. (near Expres Collision), for the past 11 years.

Originally from Michoacan, Mexico, Fernandez's family moved to California for a better life. "My father felt there were more opportunities here," Fernandez said. "Most of my family lives in Delano, but I do have a brother in Shafter."

"My customers are about 50 percent children and 50 percent adults," Martinez said. "I offer the latest haircut styles."

"I also do a lot of combovers. A combover is when a distinct part has been shaved into the top of the scalp and the customer has the rest of his hair combed over opposite the part."

Services Mario's provides to its customers include haircuts and shaves.

Customer Santos Perez, Jr.'s two sons were in the shop getting haircuts on Tuesday. His youngest, 6-year-old Seth Perez opted for a buzz cut while Santos Perez, III 10, chose a medium-fade haircut where a bit more hair is left on the sides as compared to a high-fade and a bit less than the low-fade.

"I've been coming to this shop for over 20 years," Perez said. "I've known several of the previous owners such as, David Marino, Steve Espitia and now it's Mario's." 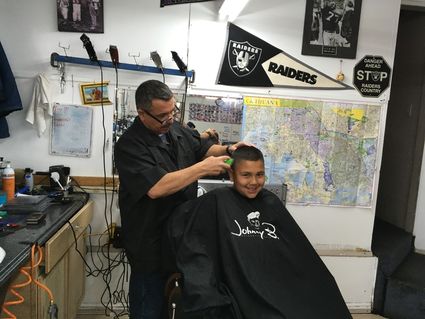 Barber Marcos Castillo was cutting the Perez boys' hair during the afternoon.

"I've been working at this shop for about 10 years," Castillo said.

The shop is open for walk-in appointments Tuesdays through Thursdays. "Nowadays, people don't want to wait for an appointment; they want their hair cut as soon as they come into the shop," Martinez said. "Back in the day, men would come into the barbershop and spend hours just visiting with friends who happened in and the barber. It used to be a good meeting place."

The shop is open Friday through Saturday, generally from 8 a.m. to 5 p.m.; however, "I've opened up at 4 a.m. if a regular customer needs me to open at that time."