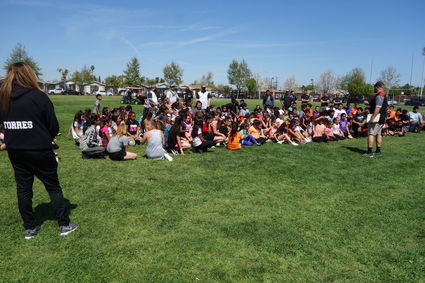 Those interested in cheer met together. (Photo by Juan Bernal)

"Football is alive and well in Wasco."

A minicamp was held at Wasco High School on Saturday, and the Bengals kicked off their 46th season. Athletes for ages 7-14 were encouraged to come out and see what being a Bengal is all about.

"Our minicamp is designed to encourage athletes and parents to learn about who we are, and what they can expect by joining our organization," Bernal said. "We have a great culture and history."

He added that the community is very supportive of the Bengals, and the teams trains to win on and off the field. "There were probably 200 families and friends watching the kids participate in the minicamp," Bernal said. 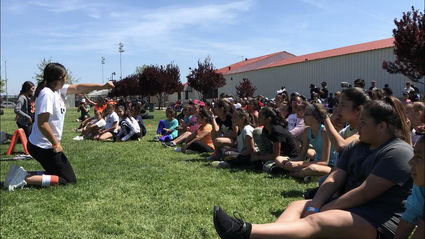 Over 200 athletes attended the minicamp, which consisted of several stations focused on football and cheer fundamentals.

"The U.S. Marines from Bakersfield West partnered with the Bengals to talk about leadership traits, as well as running a station emulating the combat fitness test Marines perform in training," Bernal said.

"There's one thing that stands out about this organization -- they're committed to seeing athletes succeed on and off the football field," he said.

The camp ended much like it started, with a competitive "tug of war." Even the cheerleaders got in the contest.

Bernal wanted to thank the volunteer coaches who also attended the minicamp.

For additional information about the 2019 season, visit the Bengals at wascobengals.org or follow them on Facebook at Wasco Bengals Football or Wasco Bengals Cheer.