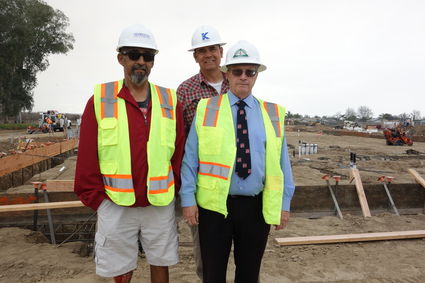 Here's the status of the district's projects:

Superintendent Kelly Richers provided a walking tour of all the construction sites. The last stop was the site of James Forrest Elementary School, where one of the 8?

parking lots is already asphalted while the other one is ready. The school will have a Spanish-type exterior much like Wasco High School to maintain continuity within the district.

The street is asphalted and ready for new students to attend school in September. While there are still many construction trucks and materials at the site, the shape of the buildings are visible. "There are eight classrooms for Pre-K and kindergarten students," Richers added.

Additionally, the three modular classroom wings are in place.

The new gymnasium at Palm Avenue is large and is also influenced by Wasco High School's architecture. "Again, the district is incorporating the design of Wasco High School so that the buildings have a similar look."

According to the plans, there will be large locker rooms for both boys and girls. Bathrooms are also in the plans

The school office is large and will have a lot of rooms shooting off the main hallway divided into several smaller offices for the dean, vice principal, nurse and counselors. There is a prineeecipal's office on this site with plenty of natural light.

The front office will have a large rounded counter that will break the entrance to the back of the building so students cannot wander behind the counter without being buzzed in. 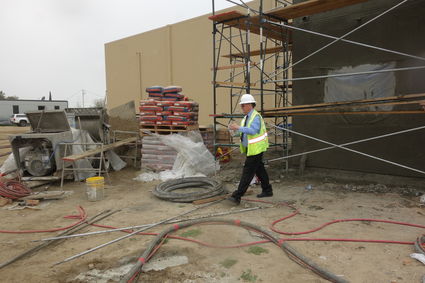 "All of the schools in the district will hold about 600 students," Richers said. "But they can accommodate up to 750 students."

The MOT building is the largest one being constructed. It's 15,000 square feet sitting on five acres," Richers said. "The busses that go to the Maintenance Operations and Transportation building (MOT) will be able to drive to the building and never have to back out. They can just drive around the building and exit facing forward. This is a big parking lot to house all the busses."

Richers also added that the building will be supplied with solar panels to help with the cost of electricity.

In front of the MOT building is a gray brick wall that will hide the trash cans used for the kitchen, since the district's kitchen also will be housed in this building.