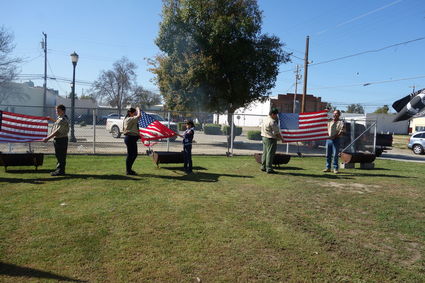 The flags are spread out and held before placing them in the fire.

Saturday was a beautiful, sunny day to hold a ceremony at the Veterans of Foreign Wars facility on East Street. It was a day to respect officially honor flags to be officially retired.

Along with many veterans, Mayor Alex Garcia and Councilmember John Pallares were present with approximately 50 other observers. 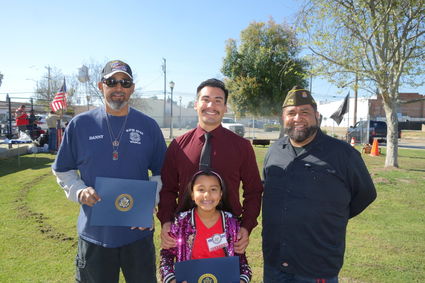 Boy Scout Troop 950 Scoutmaster Jessie Mello addressed the attendees by explaining why the ceremony was important and read an essay on honoring the flag. He mentioned said that honoring the flag has gone through some changes in recent years and expressed his hope that people would go back to respecting and treating the flag like it should be treated by remembering all who served under the flag and gave up their lives for what it represents.

During the ceremony, the Scouts removed a flag from the large bags so they could be refolded into the military triangle. They are then opened up fully and gently laid into the coals for the individual retirement of each flag.

Nearby, volunteers from Walmart were preparing small wooden crosses to place at Wasco Cemetery on Memorial Day, honoring deceased veterans buried there.