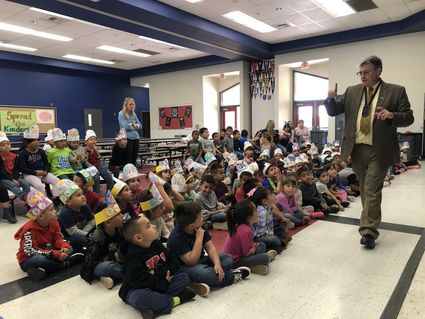 Richers' passions are butterflies and moths. As a result of a classroom assignment in junior high, he began collecting them. Due to several moves, his collection was lost.

When he moved from Pennsylvania to California, he discovered that activities such as hunting and fishing that he had enjoyed in the Pennsylvania Mountains were not so easily accessed, so in 1984, he re-discovered Lepidoptera (butterflies and moths) again.

"I joined the Lepidopterists' Society in 1984 and attended the Pacific Slope meeting in 1985 in the San Bernardino Mountains," Richers said.

At that time, Richers met other avid butterfly collectors Ron Leuschner and Julian Donahue, who allowed him access to the collection at the Los Angeles County Museum, which became a regular visiting spot for him.

In 1995 and 2002, Richers went to Lepidoptera meetings, in Meadow Valley, Calif. and Turkey Creek, Ariz. which also led him to meeting collector Jerry Powell when he visited Berkeley, where he became involved in Camp KEEP in Tulare County.

After hosting regional meetings of the organization, Richers wanted to attend the annual international meeting, He also attended meetings at the University of Maryland, Canada, Winston-Salem, Gainesville, Corvallis and two meetings at Sierra Vista, Ariz. He also attended the winter meetings of the pacific Slope at both Davis and UC Berkeley for several years, which helped fill in his winters.

About 15 years ago Richers created the idea of making a master list of moths by county for California, There were none of these resources in Bakersfield. "My list was to be similar to the one Bob Langston had for butterflies," Richers said. "With the help of Powell, who thought the idea was insane at the time, Richers created a format that allowed for the cataloging of the information on a website that is currently located at the Essig Museum at UC Berkeley.

"Since that time, almost every collector of California moths has contributed to the list," Richers said. "And because of that, I felt compelled to try one more new thing."

Former Superintendent of the WUESD James A. Forrest and Richers were good friends. Richers introduced Forrest to the study of butterflies and moths and took Forrest along with him to some of his meetings. Forrest became a collector as well and their friendship grew over this shared passion. 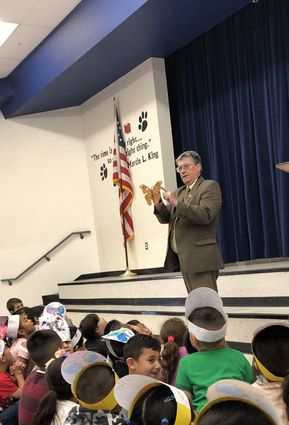 Superintendent Richers holds up a large brown Atlas Moth, the largest moth in the world.

Richers mentioned that Leuschner was the preeminent amateur moth studier from the L.A. area. "Dr. Jerry Powell is the world- renowned professor emeritus of Entomology at the University of California, Berkeley, specializing in micro-moths, probably the best in the world in his field. Robert Langston was a butterfly studier from the Berkeley area."

Richers brings part of his collection of framed butterflies and moths to presentations he gives. He also has two butterflies encased in glass cubes that are named after him. One is the Pelochrista richersana and the second one is Sparganothis richersi.

"There is one butterfly that no pictures are available," Richers said. "That is Sympistris richersi."

By the way, Richers not only still collects Lepidoptera, he also collects stamps and sugar packets as well.