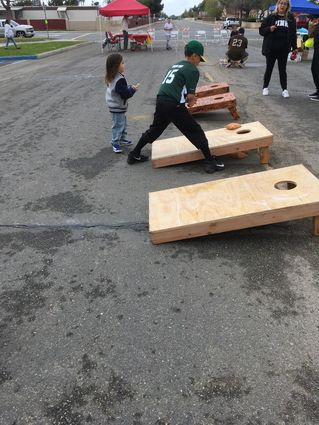 People milled around the park on Popular and Poso holding their umbrellas and wearing their warmest jackets in order to fend off the chill in the air.

However, the Little League teams were ready and eager to get out on the field and toss some balls around, and maybe even bat a few. The games went on even in the rain.

Booths were set up around the perimeter of the park ,with activities for all ages. Kids could play cornhole, go fishing, beat up a car or grab deep-pit sandwiches or hot dogs and soft drinks. It was a carnival-like atmosphere all day.

Mayor Garcia and Councilmember John Pallares were both in attendance and enjoying the activities right along with the kids. The Orange Heart Foundation set up a booth, with tubs filled with candy for everyone.

Kids were on the field playing pitch and hit-and-run to kill time before games started.

Little League President Carlos Lopez managed to take some time for an interview between minicrises that cropped up – he solved them all. Vice President Aubrey Wemberly and Secretary Samantha Jackson were visible the entire day as well. Lopez' right-hand, treasurer and team mom Ann Wilburn, stood by his side to assist. Team Manager Jesse Jackson and A's Coach Juan Lopez spent the day on the field with the kids.

In addition to all the activities at the park, an old car was available to beat with a sledgehammer. The kids got two minutes to pound the heck out of the vehicle.

"Selling the sandwiches is our major fundraiser," said Coach Lopez. "Without it, we wouldn't have a league this year." 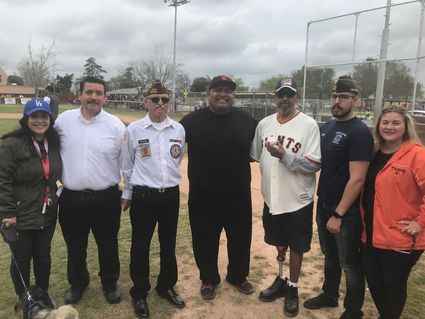 "I want to shout out special thanks to Walmart and Wonderful for the volunteers they provided for this event," Gonzalez said.

"The five minor teams are the A's, Yankees, Dodgers, Brewers and Blue Jays. The Dodgers, Giants, Angels and A's are the four major teams.