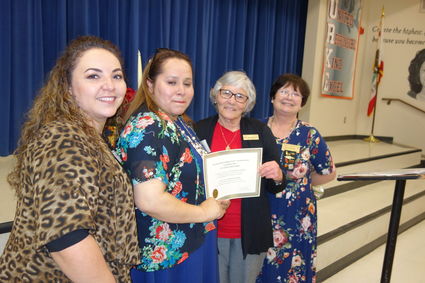 Local educators from Shafter, Wasco and Lost Hills got together to celebrate their sorority's 70th birthday celebration on March 19 at Teresa Burke Elementary School.

Beta Zeta Chapter members received a brief history of Teresa Burke from member Judy Myers. While most of the sorority members have retired, there are still a few teaching.

The members sat at decorated tables with their friends and coworkers and enjoyed catching up.

Area VII Director Mary Ellen Woodcock thanked everyone for joining in the celebration and discussed some of the history of the sorority, which was chartered March 6, 1949.

Co-1st Vice President Maria Maldonado and Belinda Martinez opened the meeting with praise for the chapter and the members' desire to keep the sorority going.

In 1916, Burke passed the teacher's examination and received her credential, but was too young to teach.

Her first teaching job was south of Bakersfield at Wible School. In addition to teaching she would cook hot meals for the children. At that time, drinking water had to be hauled to the classroom. Burke's salary for six months was $80.

Burke arrived in Wasco to teach in 1920 as a seventh-grade teacher. At that time, there were only 10 teachers on the faculty. She began teaching eighth grade the following year and was made vice principal.

At the beginning, Burke had to handle teaching 40 eighth-graders, take care of the office, answer the phones, buy supplies and handle the discipline. In 1944, she was made principal of the primary building and was named curriculum coordinator for the district, a position she held for 14 years until her retirement.

Always interested in professional organization, she was instrumental in organizing the first local elementary school teacher's club, and was its first president. She was a past president of the Kern County division of California Teachers Association. She also served as president of Beta Zeta from 1952 to 1954.

During her career, she organized the first professional extension course that was taught locally for teachers in the area of remedial reading. Burke was a frequent member of countywide and statewide committees studying various aspects of curriculum.

She was a member of many organizations, including National Education Association, Delta Kappa Gamma and Central Section for School Supervisors and the Association for Supervision and Curriculum Development. In addition, she was honored with a life membership in the Wasco Elementary Parent-Teacher Association, and was named Outstanding Woman of the Associated American University Woman, AAUW. 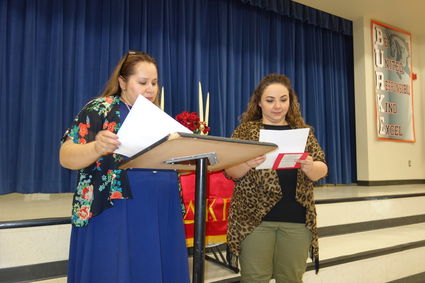 In addition, Burke was also honored for her many years of service by the Wasco Chamber of Commerce and Agriculture. She was a director of the local Welfare Association. She served at St. John's Catholic Church for many years.

After her retirement, she served as a volunteer in the Mercy Hospital Auxiliary for 25 years. Teresa Burke has been described as a grand lady and an outstanding pillar of our community, and an excellent educator. In 2006 the district honored her by naming its new elementary school for her.

Several members led the group in the Happy Birthday song commemorating the 70th birthday of the sorority.