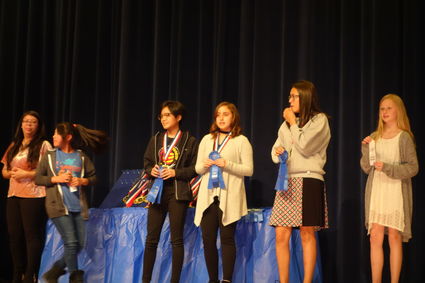 Wasco Union Elementary School District is sending seventh-grader Madison Martinez to the state History Day finals in Rocklin in May.

Madison Martinez's presentation was about Sacagawea, the only woman to travel with the Lewis & Clark expedition. She traveled with the explorers and showed them the way to their destination and back home to Wyoming.

Madison was visibly shaken as her name was announced as Champion for Individual Exhibit. Between shaking and tears of joy, she said, "Without Sacagawea, Lewis & Clark would not have found America or been able to return to Wyoming. She traveled with Lewis & Clark from the Northern Plains, through the Rocky Mountains, to the Pacific Ocean and back. Sacagawea made an impact on women."

According to Martinez's report, Sacagawea has disappeared from history books, a forgotten and unknown person. There is no information on how, when or where she died.

She also mentioned that during the entire trip, Sacagawea guided the men to their destination and assisted them in communicating with the Indians, and that before America could expand all its unchartered territory obtained in the Louisiana Purchase, it had to be explored. Sacagawea was only 17 years old and pregnant with her first child when she embarked on the journey.

In addition to Madison earning a Champion title, seventh-grader Emilee Garza earned an honorable mention and was recognized for her individual performance of Sojourner Truth (an African-American women's rights activist who was born into slavery in New York and escaped with her infant daughter to freedom in 1926).

Saturday was a long day for all the students since they arrived at the Larry Reider Education Center in downtown Bakersfield at 8 a.m. with either their speeches memorized or their project in hand.

Students returned to the building after lunch in case spectators had any questions to ask about their projects. 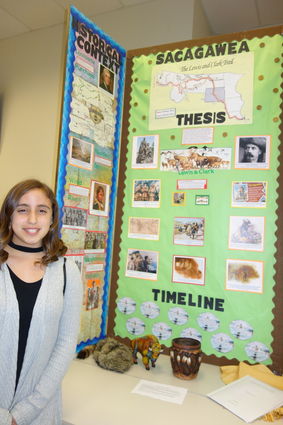 The WUESD students had a variety of topics on display, such as "The War at Home, Divisions in America on the Vietnam War" by eighth-graders Nadia Ornelas, Liliana Valdez and Alexis Garcia. This project told the story of what was happening in the United States while Vietnam was being fought. How television had a great impact on society's view of the war and the conflicts that were occurring in the United States such as the riots on college campuses.

Another presentation, "The Salem Witch Trials," was created by eighth-grader Alyssa Maldonado, which told the story of innocent women being accused of witchcraft for unknown and random events, presented by Fernando Lopez and Javier Medina, which told the story of David Koresh and the dangerous religious cult he created in Waco, Texas, and the FBI's killing of most of the people living on the compound.