Working on the parks 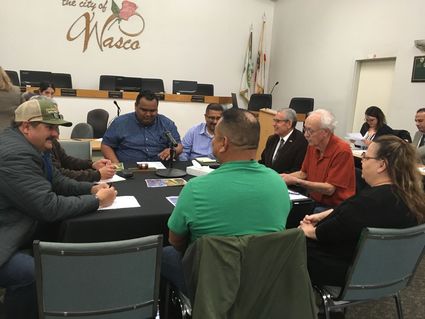 Vandalism, lighting and theft were disclosed as the main concerns with city parks at the joint City Council and recreation and parks meeting on Tuesday.

Annin Park at 935 Gromer Ave. and Barker Park at Poso Dr. and Poplar Ave. were the two parks specifically mentioned. "The bathrooms were vandalized within a couple of weeks of fixing them," said Director of Recreation and Parks Vickie Hight. "It's an ongoing problem."

Councilmember Danny Espitia commented on the unsavory people that frequent Southgate Park, at Broadway and 5th Street. "We need to step up to the plate and tell them like it is," he said. "We don't want you in our parks."

Previously there was discussion that Sunny Gem would build a new park; however, according to Hight, they are no longer interested. Espitia added that the city had plans to build a sports complex if Sunny Gem had continued with their interest.

The department also stated that if they could get another entity to invest in a park, they would run with it and invest. "I think it can be done," said Hight. She added that the field at Annin Park needs to be repaired and made usable.

Espitia expressed frustration that the Recreation and Parks Department is not under the city staff. "When did parks and recreation and the city separate?" asked Espitia. Councilmember Tilo Cortez mentioned that the separation occurred 20 to 30 years ago.

The department reported on several projects that had been accomplished in 2018, including the artificial turf at the park on Broadway and 5th Street last summer, replanting of trees at Westside Park needing replacement due to the drought and the upgraded backstop.

With a $3,000 to $4,000 in grants available, the park district anticipates filling the holes in the grass, fixing the sharp edges and replacing the fencing at Annin Park.

The councilmembers agreed that each park has its own identity. "Everybody in the town uses the parks," said Councilmember Gilberto Reyna.

"We can bring that issue up to the City Council at its next meeting," said City Manager Daniel Ortiz-Hernandez. "We need to re-evaluate what is needed by the city."

The City Council adjourned to its meeting afterward with a limited agenda.

Ortiz-Hernandez said that the city needs to determine the option of a centralized water treatment facility, but no action was taken.

Espitia reported on the expansion of Highway 46 and discussed making contact with property owners so they keep the property up and get rid of weeds and debris.