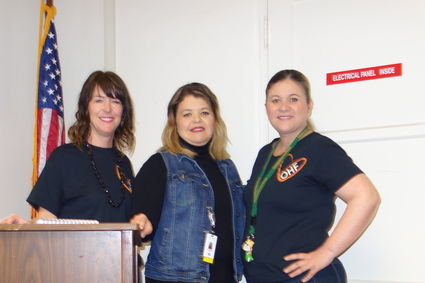 The status of the high-speed rail project was top of mind at Wednesday's Wasco Coalition meeting.

Historical Society member Marlene Swan asked if anyone knew what was happening with the high-speed rail. She wanted to know if plans remained to continue building it from Merced to Bakersfield.

Mayor Alex Garcia announced a positive "Yes" to her question. "The high-speed rail is still going forward," Garcia said. "I am strongly advocating that the heavy maintenance facility be constructed in Wasco, since it's going to be going through Wasco anyway, and we would like the employment opportunities."

The breakfast meeting led off with a presentation given by the Orange Heart Foundation. Orquidea Ocampo, Traci Clendenen and Ruvi Ocampo took turns describing the different activities the foundation is planning for 2019.

The first event will be the annual Father/Daughter Dance on April 25 from 6 to 8:30 p.m.

Ocampo shared a movie that photographer Vince Martinez prepared for the foundation. Several local leaders spoke about the contribution Orange Heart has made to the city.

In other announcements, a representative from Comprehensive Blood & Cancer Center in Bakersfield announced that March is Colorectal Cancer Awareness Month, and free colorectal screenings will be available at CBCC on Saturday, March 16 beginning at 10:45 a.m. with the screening kit instruction and distribution session in English. At 11:15 a. m. the Spanish-language screening kit instruction and distribution will follow. CBCC is located at 6501 Truxtun Ave., Bakersfield.

Also offered will be general health screenings, such as blood pressure, hemoglobin, glucose and body fat. The session is free and open to the public. Reservations must be made by calling 661-616-1661 or email at mgamino @cbccusa.com.

Additionally, the City of Wasco announced its annual community cleanup will be Saturday, April 13, beginning at 9 a.m. at Barker Park.

Richard Reding, board member of the Wasco Union Elementary School District, announced that rain has held up three school construction projects: the new James Forrest Elementary School, the upgrade to the Maintenance Operations and Transportation building behind Teresa Burke School, and the new Richard Reding gymnasium at Palm Avenue School, which will become the district's second middle school beginning August 2019.

Swan also announced that the Historical Museum will be open Saturday, Mar. 9 from 1 to 3 p.m.. She also said the Woman's Club is holding a Mother's Day raffle, where participants can buy a raffle ticket for $5 to win $300 in gift cards.