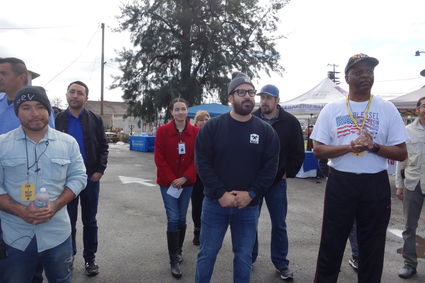 The event was sponsored by the Kern County Homeless Collaborative and included booths with spokespersons providing information and resources available for medical services, referrals to social services, legal assistance, food, clothing and much more.

"Following the Kern County's census count on homeless that took place in January, the health fair is another way to reach out to them," said Kern County Homeless Collaborative member Holly Arnold.

Felkins added that the Mission of Kern brought a lot of clothing for all ages, and attendees were welcome to browse. Clothing was available to anyone who might need it.

In addition, Felkins said that Community Action Partnership Kern provided food bags. "Inside the bags are canned goods and nonperishable food," said CAPK Relations Coordinator Albert Garza, who was one of two serving the food giveaway table along with Outreach Coordinator Wendy Andrade.

Garza has been with CAPK since 2008 while Andrade just began her journey with the organization in 2017. "We get to see the best of what we do because we are able to get out and about in the county," Andrade said.

During the fair, free warm food was available to all attendees. Martha Garcia provided burritos with handmade tortillas, orange juice and coffee, and Walmart donated 10 dozen pancake-wrapped sausages on a stick.

While attendees walked from booth to booth, Canyon Hills Church Pastor Fern Segura led a circle of attendees in prayer.

CAPK was described as being created in 1965 to provide a network of services and is currently considered the official anti-poverty agency for the county. It says it's the largest nonprofit in Kern County.

CAPK is in charge of the local food bank and says that for every dollar donated, they can purchase seven pounds of food. 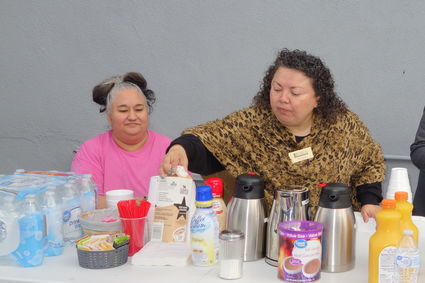 Also involved in the event was CAPK's prevention education assistant, Tristan Johnson, whose main job is to refer clients to other agencies and provide temporary shelter when needed.

Other agencies involved in the event included a California State University, Bakersfield-sponsored program where adults can receive their high school equivalency. Angel Perez was at that table with brochures describing the benefits of obtaining a high school diploma for future employment.