Generals is Headquarters for great food and service 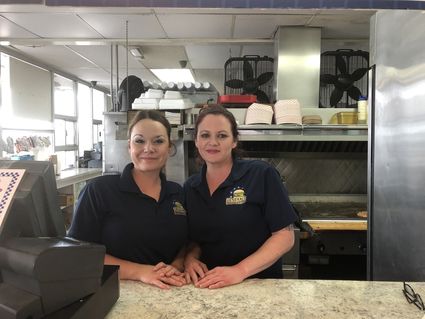 Manager Natalie Rosette and staff member Lacey McClain open up the restaurant, ready to serve you.

The Generals Headquarters has been an icon in the city for over two decades, and with new ownership taking over a year ago, the rich tradition has been continued with excellent food and service.

Owner Sergio Herrera took over operations of the restaurant with years of restaurant experience. He also owns two Perkos restaurants, one in Delano and one in Porterville.

The old saying "If it ain't broke, don't fix it" applies here, and Herrera kept the majority of the menu intact, just adding onto the already full menu of American and American spcialties. You can rely on the the Biggie Burger, which is two patties, whatever veggies you want and, of course, their unique burger sauce.

When you think of burger joints, you usually don't think of soup, but the Generals Headquarters offers a variety of soups that change daily. Chicken-and-dumpling is a favorite, as well as the baked potato with bacon. You can also get a taste of the Central Coast without leaving town, as they offer clam chowder from Pismo's Splash Café on Fridays.

One of the most popular items on the menu is their chili salad burrito -- a large burrito smothered in chili, cheese, lettuce, onions and tomatoes. You can also eat light at the restaurant, with a variety of salads, such as a grilled chicken salad or tuna salad.

Deep-fried veggies are the rage now, and Generals offers a great variety, with the usuals such as zucchini and mushrooms, but also deep-fried green beans and fried okra.

The staff is very friendly, efficient, and knows most customers by name. 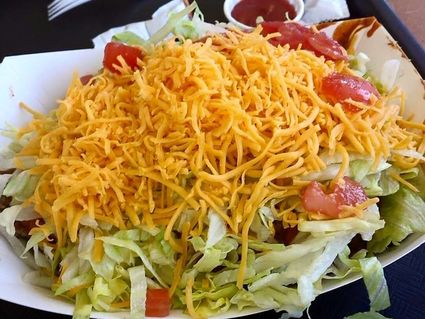 The chili salad burrito is a popular item on the menu.

"We have 15 on staff right now, and we are open from 7 a.m. to 11 p.m.," said manager Natalie Rosette. She also said that they love serving the community and the people of Shafter have been so great. "We get a lot of regulars, as well as groups of people after church services or before games at the high school."

The food alone is a great reason to visit, but you throw in their desserts and it is a no- brainer. They have over 15 flavors of shakes (try the boysenberry!), made-to-order sundaes, hot fudge cake, banana splits and freezes. One of their most popular desserts is the strawberry shortcake, which comes with a generous amount of strawberries on top with whipped cream.

Generals Headquarters also is involved in the community, supporting local schools in their different fundraisers and activities. It's a part of the city's rich history – and its future, too.