A chance to love again 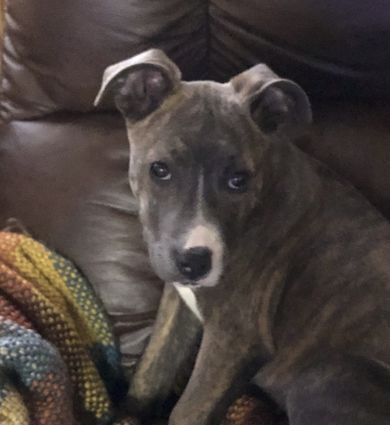 Maggie is the newest member of the Stewart family.

I wrote an column last month that was really tough for me. We had lost our dog TJ, leaving a big hole in my heart that I didn't think would ever get filled again. When we first lost him, I didn't even want to think about getting another dog. People would tell me that getting another dog would be the best thing for me. I couldn't imagine ever having to go through that again. It hurt so much that I couldn't think about it.

I would look around the house, or even do small things like taking out the trash, and realize that he was not there to trail behind me, saying hi to his doggie friends in the alley on our way to the trash bin. I thought long and hard about how to heal. I finally realized that the love we had was still there, just waiting to help another dog who was in need of a good home, just like TJ was when we first laid eyes on each other at the shelter. Through a lot of praying, I realized that it was okay to think about giving that love to another needy soul, giving him or her a chance of a better life.

I was looking on Craigslist, waiting for that "ah ha" moment, one that would let me know that I was doing the right thing. Well, that moment came the other day. I saw a brindle puppy, with the look in the face like TJ when he was a younger puppy. The ad said that she was five months old and needing a new home. I talked to my wife and she told me that we could go get her. She was in Tulare. My son, Nick, and I headed to Tulare to pick her up. Nick wasn't as sold as I was because he was actually hoping for another boy. Well, all doubts were long gone after we met her. She came bounding up to us, covering us with kisses. The lady giving her up said that they just didn't have the room or time for her. You could tell that she was in need of attention and she was drinking it up big time.

I couldn't stop petting her and getting those kisses all the way home. But, instead of being overjoyed, I was happy and sad at the same time. When I looked at her, I was happy for another chance to have that special companion, but sad when I looked at her and thought of TJ. It all built up to the trip I made to Walmart to get Maggie the supplies that we would need for her.

I started crying on the way over there, actually talking to TJ. I told him that I still missed him so much and that I would always love him. I almost felt guilty for getting another dog, in some ways feeling like I betrayed that bond that we had. But, the more I thought and prayed, the more I realized that what we had would never really be replaced. I told him that I would never forget him and I know that I never will. But, when I look at my baby girl's face, and see that tail wag and her big ears going up like little antennas on the top of her head, I know that there is room enough for her. I think that TJ would have just loved her, having a little sister to boss around like he liked to do to his cousin, my older son's dog Gunner.

I am so happy now, knowing that I will be able to even take the lessons that I learned having TJ in my life and be a better companion than I was before. Thank you TJ for the memories. I still love you and always will. I thank God for you TJ and I also thank God for Maggie, this little girl that I have fallen in love with already.