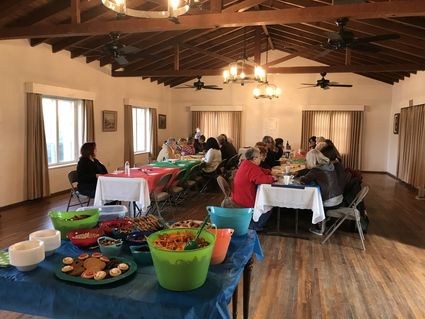 The players were set up at tables with taped arrows signifying who the teammates were.

Twenty-four women got together in Wasco last week to play 18 games of Bunko, two hours of fun and games as they kept score and passed around the bunko trinket.

Everything in bunko is up to the roll of the dice. There are six games in each set, and there were three sets played during the afternoon.

Historically, Bunco is considered a parlor game (played indoors or in the parlor), and is usually played with 12 or more players divided into groups of four, trying to score points while taking turns rolling three dice.

The players play in teams of two. Teammates sit across from each other. Whichever team gets the highest score moves closer to the head table. Each losing team remains at the same table.

The game is 100 percent luck; no skill is involved. There are no decisions to be made, and scoring is simple. 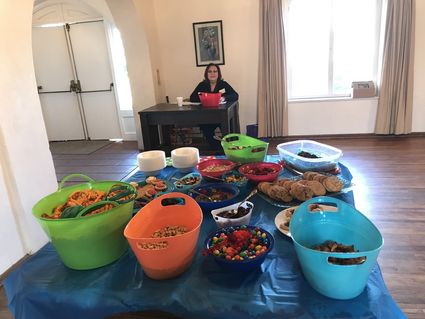 Cheryl Woody was in charge of verifying the Bunkos achieved during the game.

Bunko clubs are all over. Jill Drescher, of Wasco, started a Bunko group in Wasco in the 1980s that is still going strong today.

Because there are normally 12 players, each player selects a month to host Bunko. Depending on the specific group, cash prizes or wrapped gifts are given to those who end up with the most Bunkos, least Bunkos, or the number of wins and losses.