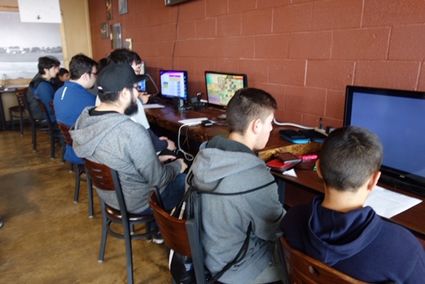 Gamers are at their screens practicing before the competition begins.

Wasco's Pizza Factory was taken over by an ESports invasion Saturday, when over 30 people came in prepared to play the Super Smash Brothers Ultimate competition.

Each player selects a video game character to play. Three games equal one set, and to win a set means a person needs to win two out of three games.

Anyone with an interest in video games was able to enter, and most of the visitors to the restaurant signed up to compete and not just play the game.

Espinoza explained that a character could each have its own particular strength as well as a weakness; for example, one character can fly, while another might be better at hand-to-hand combat or at using a bow and arrow. Several players said it would be better to do some research on what the characters' strengths and weaknesses are before entering a competition. "Many players don't stick with just one character each time they play," Espinoza said. 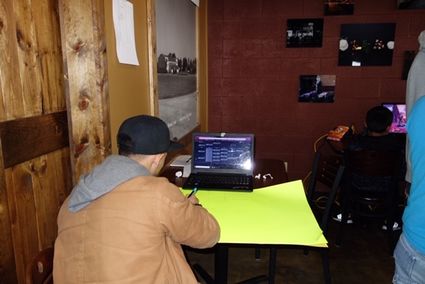 Eric Munoz keeps track of the winners' of each match.

The four organizers of this week's competition are the creative force behind Wasco's participation in ESports. Miguel Cervantes, Eric Munoz, Cristian Cabrera and Angel Mota organized the event and hope to hold a competition at least once a month. They expressed their appreciation to Pizza Factory for allowing them to set up their games in the restaurant.

"Maneuvering the characters on the screen takes a tremendous amount of skill and dexterity," 16-year-old Joshua Garza said. Garza was the reigning champion and beat six people in the 2018 Grand Finals. He's one of the lucky ones who owns his own console and plays almost every day.

An eighth-grader from Wonderful College Prep, Joseph Rubio, has only been playing about one month. "Being the winning person feels good," he said.

Louis Garcia enjoyed watching the gamers compete and joined in the enthusiasm those watching players' excitement as the winners gave high-fives to competing partners. Garcia is heavily involved in baseball and provides a lot of donations to Wasco.