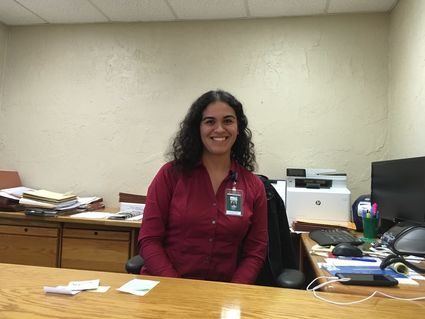 City Clerk Maria Martinez has been wearing more than one hat since she has been serving as the city clerk and HR manager for awhile.

That ended when Nancy Vera was promoted from payroll specialist to HR manager. It's been a fast rise for Vera, since she's only been with the city since March 2018.

Vera has a gentle nature about her and an engaging smile as she greets visitors to her office. She is easily accessible to staff whenever needed.

She's a graduate of California State University, Bakersfield, with a

bachelor's degree in political science. Vera was raised in Wasco and attended local schools, including Wasco High. "I've been here since I was five years old," she said.

Vera describes herself as a homebody and enjoys every aspect of her job. She likes being able to interact with everyone in the city and feels her political science degree helped her get her job.

While in high school, she played on the Tiger tennis team and continues to play now with one of her sisters on a regular basis.

Being the eldest, she loves it when her sisters text her while they are at school and just finished a test, letting her know about their grades. "It's pure joy being an older sister," Vera said.