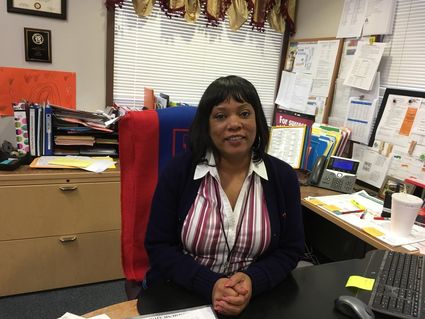 The principal of Teresa Burke Elementary School shows joy as she talks about her relationships with her church, her community and her colleagues.

Monique Goodwill had a constant smile on her face and a glow about her as she described what her school did to acknowledge Black History Month. "Last Saturday, we invited all the African American kids and their parents to join us as we kicked off Black History Month," said Goodwill. "We talked about Catherine Johnson, who was one of the characters portrayed in the movie 'Hidden Figures.'"

Students studied about her and learned how she helped our country with the space program. Johnson was a mathematician who worked at the National Aeronautics and Space Program as a mathematician by coming up with the formula that helped one of our rockets make it back from the moon.

"This was a lesson not only in history, but also math and science," Goodwill said.

Loren Anthony, vice principal at Leo G. Pauly Elementary School in Bakersfield, was the guest speaker. He presented an inspirational speech about how important home and school are for students' growth and well-being. He encouraged parents to help students attend school regularly and assist them when they need it.

Goodwill said the school will be doing events such as the Black History Month kickoff every month with different topics.

Goodwill was born on Long Island in New York and attended Northeastern University in Boston.

While her family still lives back east, she insists she doesn't feel alone in California, with all the support she gets from her Wasco community.

"The church has been my family for a number of years," she said. "I receive a lot of love and support from everyone."

Even though she doesn't have much spare time between her career and church, she often finds herself doing a lot of reading. She has two books going now: "Trust Matters – Leadership" by Megan Tschannen Moran, and "The Family Business" by Carl Weber.

One of her greatest discoveries is how much she loves her latest electronics. "I bought myself the tablet this year, and you can play games, read and watch movies," she said.

After she bought her tablet, her mother told her, "You've finally joined the 21st century."