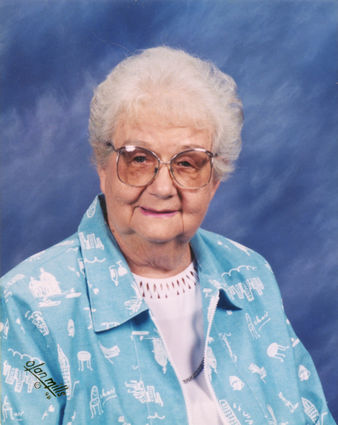 Frankie Irene Siemens, a resident of Shafter, passed away peacefully on Feb. 9, 2019, having reached her 96th birthday in January.

Frankie was the youngest of six children born to early Wasco residents Frank and Essie Trogdon. She attended Wasco schools through high school. She and Ruben Siemens were married in 1941.

The outbreak of WWII made life interesting for the couple. Ruben served in Europe with the Army Air Corps, while Frankie raised their newborn son and worked for the Southern California Gas Co.

After the war, Frankie and Ruben settled into life on their newly acquired small family farm close to Maple School, where they added two more boys to the family. In 1961, they stepped out of farmi ng, and in 1966 she became the secretary of the Shafter-Wasco Cemetery District. In 1974, Frankie became the executive secretary of the California Association of Public Cemeteries, a position she continued to hold through Ruben's death in 1987. She retired in 1996.

Her community involvement was varied and extensive. Frankie was a leader in 4-H, a Cub Scout den mother for nine years and PTA president for two years. She was quite active in her church, teaching children and youth, as well as serving as chair of the Stitch and Study group.

A visitation will be held on Friday, Feb. 22, from 4 to 8 p.m., at Peters Funeral Home in Shafter. Graveside services will be held Saturday, Feb. 23, beginning at 10 a.m., at Shafter Memorial Park. A memorial service will follow at 11 a.m. at the Shafter Mennonite Brethren Church; Pastor Pat Coyle will officiate.

In lieu of flowers, the family suggests gifts to Hoffman Hospice or Fresno Pacific University. Online condolences and a tribute video are available at PetersFuneralHomes.com