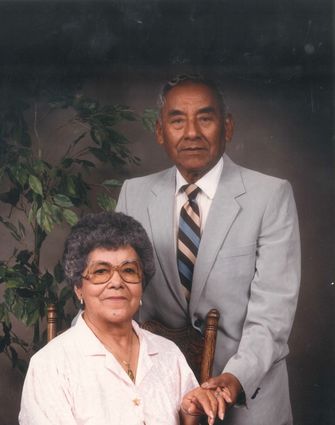 Esther Gallardo Montecino was born on March 27, 1921 in Arizona.

After her birth, her parents, Primitivo Gallardo and Paula Lopez, moved the family to California, where she attended local schools. She met her soulmate, Louis Montecino, and together began raising their three children. They were married 75 wonderful years before Louis passing in 2010.

Esther was a devoted Catholic woman, who went to church every opportunity she had. Along with her faith, Esther valued her family and knew the importance of togetherness. She made sure everyone was taken care of and fed. She would often bring food to a sick family member or make a quick phone call to ensure a relative's safety.

Esther had a great sense of humor and quick wit, which was loved by everyone around her. Esther enjoyed music, being adventurous and making tortillas with her husband. Esther was a loving and caring mother, grandmother, great grandmother and great, great grandmother. She will be missed and loved.

A Mass of a Christian Burial will be officiated by Father Raul A. Sanchez Flores Tuesday, Feb. 19, at 10 a.m. at St. John's Catholic Church in Wasco. A viewing will be held Monday, Feb. 18, from 4 to 8 p.m., with the recitation of the Holy Rosary at 6 p.m., at Peters Funeral Home in Wasco.