Where animals call the shots 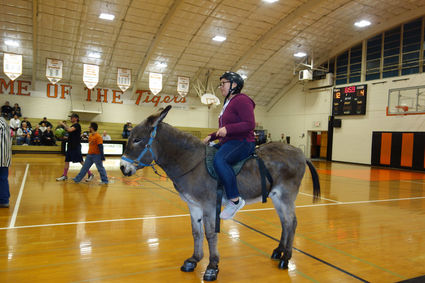 Linsey Lee was stuck with the most-stubborn donkey in the game. She was forced to watch the game go by while stuck on her animal.

A basketball game played on the backs of donkeys clearly has a different pace than any other a fan is likely to see. But those in the stands are rewarded every year as the Wasco High Future Farmers of America take on its alumni in a game of donkey basketball. Last Friday the least stubborn team won when the current students defeated alumni, 24-22.

There was a lot of laughter as the players tried to make their way across the court to score, and the donkeys contemplated whether they wanted to cooperate or not. Frustration set in for one FFA student, Linsey Lee, who was stuck on a donkey that refused to move for almost an entire quarter. She was only able to sit and watch the game go by.

While several stubborn donkeys played the court, there was definitely one that cooperated with its rider, FFA student John Ballou. Together Ballou and his donkey were the highest scoring pair for their team. 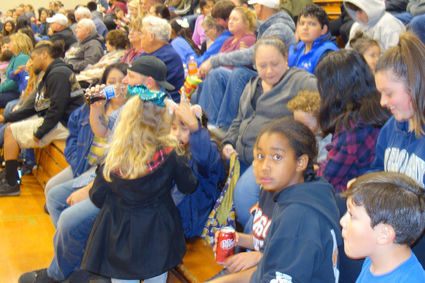 The stands filled up quickly with supporters.

Related alumni and FFA players were spotted getting grabby and aggressive as they attempted to knock the ball from one another. Some of the dads even went after their daughters playing for the FFA team. Ballou's arms seemed to stretch like Spiderman as he grabbed for the ball out of his normal reach. "He was all arms," said attendee Benito Juarez, Sr. who was there cheering on his son Benito, Jr., playing for the alumni team.

The biggest win of the night, however, was that not one donkey made a mess on the gym floor. So not only was it an exciting game, it was a clean win as well.