Recycling is top of mind 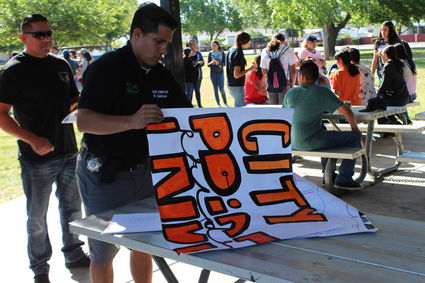 The City of Wasco's monthly coalition breakfast meeting held last week was full of information and announcements. Guest speaker and Code Information Enforcement Officer Matthew Maldonado asked that all residents obtain a blue recycling bin through American Refuse, as recycling has been mandated. He further asked that all businesses and schools help spread the word. For additional information on recycling, residents may contact the City of Wasco Public Works Department at 661-758-7271.

Maldonado also announced that the Code Compliance Department will be hosting its biannual community cleanup on April 13 from 9 a.m. until 12 p.m. at Barker Park. Resident bulky waste pickup, for those who are unable to bring their items to the park, will also be available on a first-come, first-serve basis. Residents should call ahead to schedule a bulky waste pickup or to be placed on the pickup list at 661-758-7213.

Before ending his report, Maldonado advised that Westside Family Fellowship has 12 heaters available to donate to needy families. Contact the church at 661-758-9013 if you know of anyone who could benefit from this service.

In addition to the guest speaker, the following organizations provided reports on current projects.

-- Wasco Union Elementary School District board member Richard Reding reported on new school construction. The projects are moving along quickly and both James Forrest Elementary and Palm Avenue will be open for students in September.

-- Laura Wolf of the Kern Literacy Council shared that the council will make tutoring available pending volunteer tutors. She also mentioned they have made a $500 scholarship available to a female student from Wasco or Shafter High. The scholarship deadline is the end of April and more information can be obtained by contacting the Council at 661-324-3213.

-- The Wasco Woman's Club reported they are having a Bunko fundraiser on Wednesday, Feb. 20 at 2 p.m. Prizes will be given.

-- Richard Reding announced that free tax services are currently available at Grace Community Church on Saturdays from 8 a.m. to 12 p.m. The church is located at 1544 7th Street and can be reached at 661-758-6588.

[BOX] Celina Palacio of the Bakersfield Museum of Art reported that the museum is hosting enrichment activities at the Wasco Library. The next one will be Friday, Feb. 15 from 4 p.m. - 6 p.m.

-- Yani Valdes of White Wolf Wellness announced they are sponsoring free yoga classes at Barker Park the 1st, 3rd and 5th Thursdays of the month,12:30-1:30 p.m.

-- Camilo Vasquez of the Downtown Business Association announced that the organization is completing the necessary steps to become the Wasco Chamber of Commerce.

The next coalition meeting will be held Wednesday, March 6 at 7 a.m. at 810 8th St, hosted by the Orange Heart Foundation.